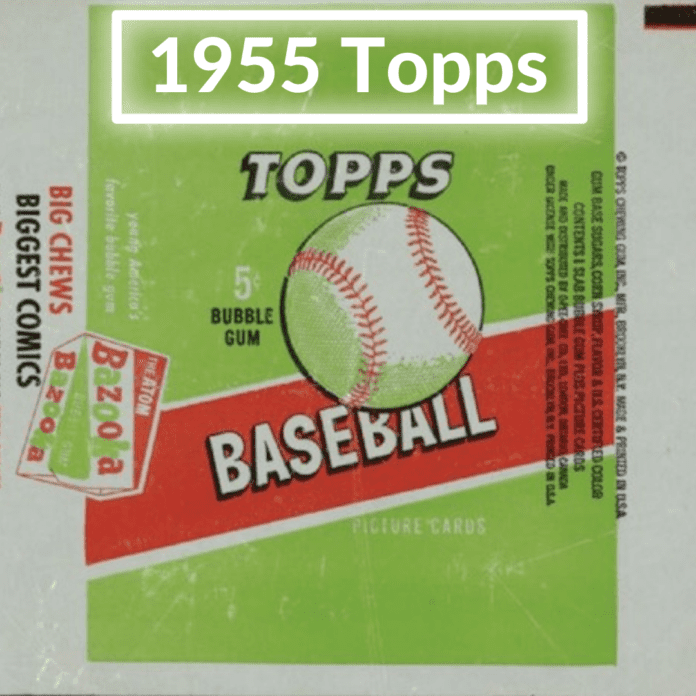 The 1955 Topps baseball cards have nice nice rookies like Roberto Clemente, Sandy Koufax, and Harmon Killebrew, and a ton of other hall of famers. This set still ranks in the top ten for most collectors. 1955 was the first time Topps used a horizontal design. On the card was a large head shot along with a smaller in action shot of the players. The backs contained some information about the players, a cartoon, and then the major and minor league batting and fielding records.

What Are The Best 1955 Topps Baseball Cards?

Here is our list of the best 1955 Topps baseball cards in order from the best on down. Three of the top four are rookies because as you know rookies are what most people collect the most because their values rarely decrease. All in all these are some beautiful cards that most collectors would want to own even if it is not a rookie.

This is Roberto Clemente’s rookie card. It shows him with a large headshot and then the in action smaller image is of Roberto standing and ready to clobber the baseball like he always did. Then the team logo of a pirate is at the top right. The back of his card shows his minor league stats because he didn’t play in the majors in the previous year 1954. Roberto Clemente played in 15 all-star games, won the gold glove 12 times, was the batting leader 4 times and was the National League most valuable player in 1966.

The 1955 Topps Sandy Koufax rookie card is one of the best rookie cards of the 50’s. The front of the card shows a headshot of him with a small smile and then the other half shows Sandy Koufax standing in the dugout ready to pitch. Sandy Koufax was 19 years old when he joined the major leagues. Even though his career was cut short because of arthritis in his left elbow, he is still considered by many to be one of the greatest pitchers to pitch in the major league baseball history. Koufax was an all star for six seasons, he won 3 cy young awards, and was the National League’s most valuable player in 1963.

Dodgers great Jackie Robinson had a short 10 year career in the major leagues but in that short time he was able to be an all-star for six consecutive seasons. Jackie Robinson also won the Rookie of The Year in 1947, play in six world series, and was a World Series champion in 1955. He was also the first black person to win the National League Most Valuable Player in 1949. His 1955 Topps card has a smiling picture of his head on the right with a smaller in action full body picture of Jackie Robinson at the end of his swing.

The 1955 Topps Harmon Killebrew is his one and only rookie card. The great first baseman’s card has a picture on the right of his head with a small grin and wearing the Washington Nationals hat with a “W” on it. On the left of that is a full body picture of him swinging the baseball bat. Harmon Killebrew had a compact swing that generated a ton of power and that made him one of the most feared hitters of the 60’s. Over his career he lead the league in home runs 6 times, was an all-star 13 times and won the Most Valuable Player award in 1969 with the Minnesota Twins.

The 1955 Topps Hank Aaron baseball card is his second year card. The headshot on the card is the exact same picture as his 1954 rookie card. There is a full body actions shot on the left side of Hank Aaron swinging the bat. Well most baseball fans not only know Hank Aaron, but also consider him to be one of the best to ever pay the game. That is summarized by the fact that he holds the record for most all-star selections at 25. Hank currently holds the mlb record for most career RBI’s, extra base hits, and total bases. And depending on who you ask he is also the home run king.

The 1955 Topps Willie Mays card is the release just after his MVP in 1954. The card shows a large headshot of Willie with a nice smile and then a full body picture of him batting. Willie Mays is another player that is one of the greatest of all time. He also played great defense and won 12 gold glove awards (the best player at his position). Mays lead the league in home runs four times, stolen bases four times, was an all-star 24 times and won two Most Valuable Player (MVP) awards in 1954 and 1965.

The 1955 Topps Duke Snider baseball card depicts a full body, but smaller picture of him swinging the bat, and then a large head shot of Duke with a serious look. Duke Snider, nicknamed “The Silver Fox” played primarily center field and was named to the all-star team eight times and the National League MVP runner-up in 1955. Duke Snider amassed 407 home runs, 1333 RBI’s and a nice .295 career batting average. He was also in six World Series games with the Dodgers and won two in 1955 and 1959.

The 1955 Topps Ted Williams baseball card shows a nice smiling Ted headshot with the “B” for Boston on his hat, and to the right is a full body image of Ted swinging for the fences. Ted Williams is considered one of the greatest to ever play, the only reason this card is not at the top of the list is because this is later in his Hall of Fame career. He was an all-star nineteen times and was a two time American League Most Valuable Player (MVP), and two time Triple Crown winner. The cool thing is Ted played his entire career with the Boston Red Sox.

The 1955 Topps Al Kaline stands out with it’s rich bold red background. Then there is a nice young picture of Al Kaline and then the full body smaller image swinging the bat. Al Kaline, nicknamed “Mr. Tiger” played for the Tigers his entire career. He was an all-star 18 times and won 10 gold gloves in right field. Kaline was the runner up for MVP twice, belted 399 home runs, and has 3007 hits for his career. Al Kaline went on to become the Detriot Tigers TV color commentator until 2002.

Ernie Banks was another player to play with the same team his entire career. His 1955 Topps card features Ernie Banks large headshot with a serious look, and then the small but full body action shot of him fielding the ball at shortstop. His hat has the large red “C” for the Chicago Cubs. Ernie Banks nickname is “Mr. Cub”. Mr. Cub won two MVP’s back to back in 1958 and 1959. Banks was able to reach the 500 home run threshold with 512. An accomplishment that not many players reached at that time.

I’m sure there are some cards missing from the top ten but those are what we consider the best ten. A few players that missed the cut, but are still great cards are: Eddie Mathews, Gil Hodges, Phil Rizzuto, and Yogi Berra. Even with those missing it would be a hard argument replacing any of the players we have in the top 10.