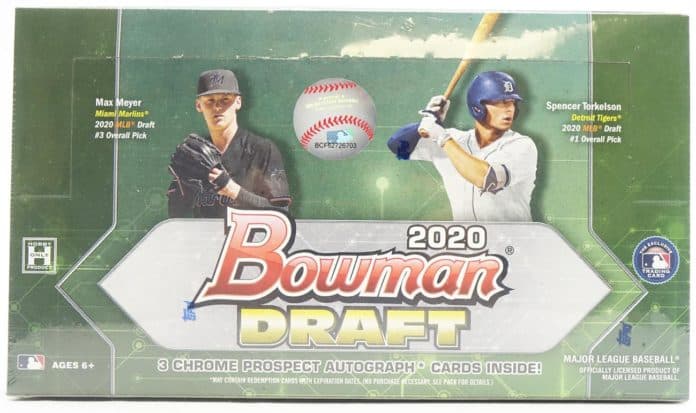 Topps Bowman baseball card collections come back with another hit. The 2020 Bowman Chrome Draft collectables are the first draft of June’s picks, where the players are in their respected jerseys.

Even though the 2020 Bowman Chrome Draft is not a big lineup collectable but the rookies and prospects inside the pack are inspiring. The prospects inside are well-known and beloved baseball players with a strong fan following.

Let us dig deep into which players are available in the modern 2020 Bowman Chrome Draft sports cards.

Spencer Enochs Torkelson is a rising star from Detroit Tigers. He is an American first baseman and third baseman. Spencer Torkelson was selected by the Detroit Tigers in Major League Baseball drafts of 2020.

The Tigers picked Torkelson with a whopping amount of signing bonus. He was acquired for $8,416,300, making this amount the highest signing bonus ever awarded to any draft in Major League Baseball history.

It was solely because of the illustrious amateur career of Spencer Torkelson in his school and college that changed his life. He scored 53 RBIs and 25 home runs in just 55 games at his college.

Spencer Torkelson broke the record of Barry Bonds for the highest home run in his freshman year.

St. Louis Cardinals acquired Jordan Walker with a signing bonus of $2.9 million. Walker believed 2020 was his year but unfortunately due to the COVID-19 pandemic situation, the minor league season got canceled. Jordan Walker continued his training throughout 2020 and shone brightly in 2021.

A prominent outfielder, Zachary Richard Veen is an American baseballer, playing for Colorado Rockies. He was drafted in Major League Baseball in 2020. For an exceptional amount of signing bonus, Veen joined Colorado Rockies for $5 million.

Like everyone, Veen also didn’t get a chance in 2020, so he made smashing hits in 2021. With 15 home runs, 36 stolen bases, 75 RBIs, and 27 doubles. During junior year, Zac Veen was named Player of the Year due to impressive play.

Tyler Christian Soderstrom plays for Oakland Athletics as a baseball catcher. He was also selected in the Major League Baseball draft of 2020. Oakland Athletics signed him for $3.3 million. Due to COVID-19, his 2020 minor league matches also got canceled.

However, in 2021 Soderstrom played 57 games where he scored 12 home runs, 49 RBIs, and 20 doubles. Being a great player since his school and college time, Tyler Soderstrom was a favorite for Oakland Athletics.

Tyler Soderstrom’s father Steve Soderstrom was also part of the MLB world. He was signed in the MLB draft for 1993 by the San Francisco Giants.

The New York Yankees rising star, Jasson Dominguez is a professional baseball outfielder. He is nicknamed “The Martian” or “El Marciano”. Dominguez is the son of the former baseball player, Felix Dominguez.

Jasson Dominguez loved baseball since his childhood. Due to his impressive play, many spectators compare him to the legends Mickey Mantle, Mike Trout, and Bo Jackson.

Robert Harris Hassell III is an American baseball outfielder, playing for San Diego Padres. The 20 years old Hassell bats and throws from the left. Robert Hassell was selected in MLB drafts for 2020.

For a wonderful amount of $4.3 million as a signing bonus, Hassell is an important part of the San Diego Padres. In 2020 Hassell continued training after the cancelation of the minor league. He made sure that 2021 should change his life. And hence in 110 games, he scored 33 doubles, 76 RBIs, 11 home runs, and 34 stolen bases.

His brilliance at college was loved by everyone and that’s how San Diego Padres noticed him.

These are the top 2020 Bowman Chrome Draft Prospects. We are sure they will end up being the main highlights and the stars of MLB history with continuous efforts and brilliant play.