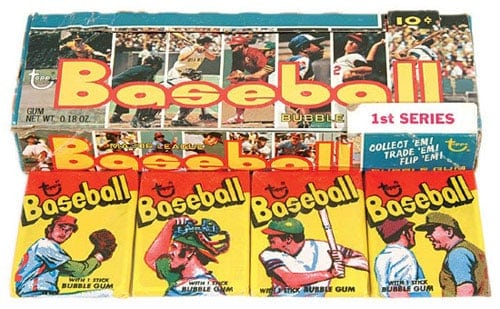 The 1973 Topps baseball cards set consists of 660 cards and each card measures 2 1/2″ x 3 1/2″. The front of the card contains a nice color photo of the player, usually in an in action shot, and then a silhouette of each player at the bottom right of the card.

The back of the 1973 Topps baseball cards is black and yellow with a little bit of white. Most of the cards has a cartoon at the top and the background for that is white. In the middle it shows the normal information about the player including his height, weight, bats, throws, born date, born city and state, and home city and state. Then there is the major league batting or pitching record in black with a yellow background.

What Are The Best 1973 Topps Baseball Cards?

From Hall of Famers to rookies, the 1973 Topps baseball cards have some great vintage cards of the MLB players. From Willie Mays last “active” card, to Hank Aaron, and then Mike Schmidt’s rookie card. Which are the best in the set?

This is the 1973 Topps Hank Aaron baseball card that shows a nice photo of him catching a fly ball in the outfield or first base because it is now nearing the end of his career.

The back of the card shows a cartoon of a batter with “673” next to him and then next to the cartoon it says “Hank needs only 41 homers to tie Babe Ruth’s All-Time record.”. And even though it is nearing the end of Hank’s career, he still hit .265 along with 34 Home Runs and 77 RBI’s in only 449 at bats. Hank Aaron’s career totals until this point is .310 batting average and 673 Home Runs.

This is the 1973 baseball card that is titled “ALLTIME HOME RUN LEADERS” and features Babe Ruth, Hank Aaron, and Willie Mays, all on the same card. It shows that Babe has 714, Hank as 673, and Willie has 654.

The 1973 Topps Pete Rose baseball card shows a photo of him looking on towards a ball he just hit, probably during batting practice with the Cincinnati Reds.

The back of his card shows two baseball players walking together holding a baseball glove and a school book and then it says “Pete attended the same high school as Tigers Ed Brinkman!”. It say below that “Pete narrowly missed reaching the 200 hit plateau for 6th time in his career last season. Still he led both leagues in Hits and continued to be one of the finest leadoff men.”. Pete Rose finished the 1972 season with a .307 batting average, 198 hits, 31 doubles, 11 triples, and 6 Home Runs.

This is the 1973 Topps Tom Seaver baseball card. It shows Tom posing for the camera looking like he is about to start his pitching windup for the New York Mets.

The 1973 Topps Goose Gossage rookie baseball card shows a photo of Goose in a pitchers pose wearing his Chicago White Sox uniform and cap. In fact the pose in the picture matches the silhouette at the bottom of the card.

The back of the card has a cartoon of a player catching a ball and it says “Rich is a fine fielding pitcher”. The back also says that in his last 10 appearances for White Sox in August, 1972, Rich allowed only nine hits in 25 1/3 innings, fanned 20 but he walked 13. It also says below that Rich attracted the attention of Chi-sox Pitching Coach Johnny Sain after his fantastic season at Appleton in 1971. He was Topps’ Mideast League Player of the Year.

This is the 1973 Topps Nolan Ryan baseball card that shows him posing at the start of his pitching stance wearing a California Angels uniform and cap.

The 1973 Topps Dwight Evans rookie card also is the rookie card for Al Bumbry and Charlie Spikes. The top of the card says “1973 Rookie Outfielders”. The photo of Dwight Evans shows his in his batting stance wearing his Boston Red Sox uniform and hat.

The back of the card shows the names, team, and all the basic player information. But no stats. Dwight Evans did finish 1972 with a .263 batting average with 1 home run and 6 RBI’s in 57 at bats. Dwight would not get his first gold glove until 1976.

This is the 1973 Topps Roberto Clemente baseball card and it has a nice full color photo of him in action batting at the plate during a game. He is wearing his Pittsburg Pirates uniform and hat.

The 1973 Topps Willie Mays shows him posing for a photo wearing his New York Mets uniform.

The back of the card shows a guy standing with stars all around him and then it says “Willie has been a member of 19 consecutive all-star teams.”. Other than that it just shows his great hall of fame stats that shows that in 1972 he ended up with a .250 batting average and hit 8 home runs and 22 RBI’s in 309 at bats for both the San Francisco Giants and the New York Mets.

This is the 1973 Topps Mike Schmidt rookie baseball card. The card also has players Ron Cey and John Hilton on it. The photo of Mike Schmidt shows him in his batting stance wearing his Philadelphia Phillies uniform and hat.

The back of the card shows only the basic information about the players. For example Mike Schmidt has a height of 6’2″, weight of 195, he bats right and throws right, was born 9-27-49 in Dayton Ohio, and still lives in Dayton Ohio. Even though the card does not show, he did play a very little in 1972 and hit his first home run that year, and only one home run that year.

The 1973 Topps Baseball cards has a few key rookies in Mike Schmidt, Ron Cey, and Davey Lopes. The set also contains the last active card of Willie Mays. And a nice card that has Babe Ruth, Willie Mays, and Hank Aaron all on the same card.