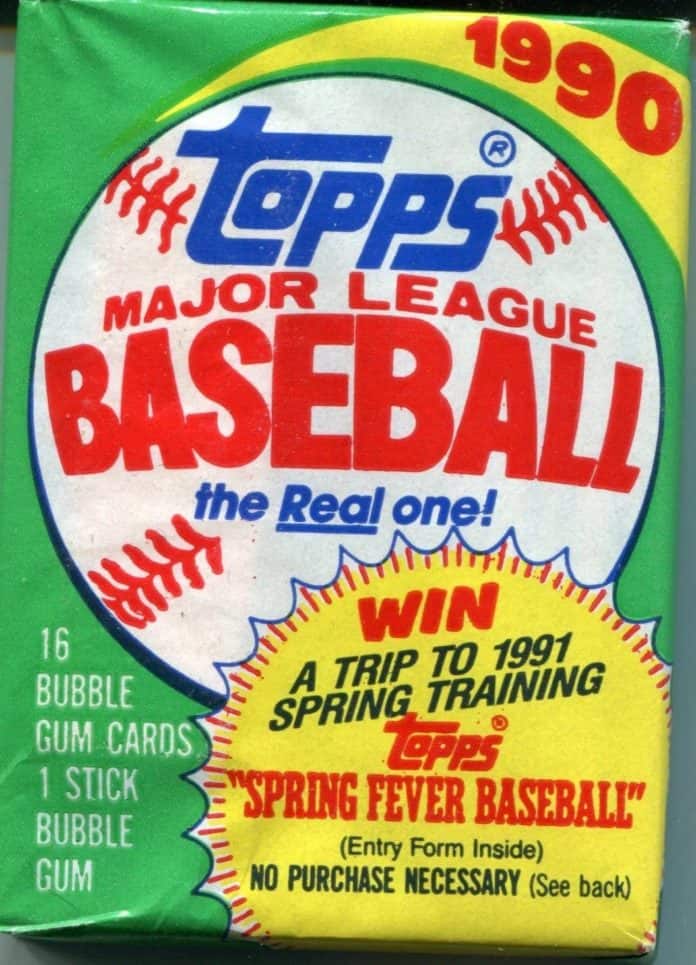 The 1990 Topps Baseball Cards set consists of 792 cards and each card measures 2 1/2″ x 3 1/2″. The front of the card shows a photo of the player wearing their uniform, and some in action. The border is very colorful and has has many designs to it. The team name is shown at the top and the persons name is at the bottom inside of a banner like box.

The back of the 1990 Topps baseball cards show the players name and position in a dark black box with white writing near the top of the card. Above that is the basic player information like height, weight, throws, bats, year drafted, position drafted, how acquired, born date and city, and current home. Then the card shows the complete major & minor league batting record. Below that some players have a little write up about them unless they have been in a league a long time and don’t have room on the card. At the bottom is a 1989 Monthly Scoreboard that shows two stats broken down by month.

What Are The Best 1990 Topps Baseball Cards

There are some great looking cards in the 1990 Topps Baseball Cards set. And included in those are some rookie cards and one great rookie card that is also an error. Look below to see all your favorites.

This is the 1990 Topps Curt Shilling baseball card. It is not his rookie, but his second year card. It shows Curt smiling in a photo wearing his Baltimore Orioles uniform and hat.

The back of his card says “Curt was signed for the Red Sox by Scout Ray Boone.”. It also shows that Curt Shilling was called up to the majors in September and pitched 8.2 innings. He did not fair well though getting a 6.23 ERA and 6 K’s.

The 1990 Topps Barry Bonds shows the future hall of famer holding a bat during a game and wearing his Pittsburg Pirates uniform and batting helmet.

The back of the card says “Barry’s 11th HR of 1989 gave him and his father, Bobby Bonds, 408 career Home Runs, more than any other father-son combination in baseball history.”. The back of his 1990 Topps Baseball card also shows that in his fourth year in the major leagues he hit .248 with 19 home runs and 58 RBI’s. He also stole 32 bases.

This is the 1990 Tops Roger Clemens baseball card showing a photo of Roger posing for the camera wearing his Boston Red Sox jersey and hat.

The back of the card says “Roger devotes time to Boys & Girls Club of Boston.”. That pretty cool of him. Now in his 6th season with the Red Sox, roger finished the season with a 3.13 ERA, 17 wins, and 230 strikeouts in 253 innings pitched. Kind of an off year for Roger Clemens as he did not make the all-star team or finish in the Cy Young voting.

The 1990 Topps Juan Gonzalez rookie baseball cards shows him posing to the camera holding his bat and wearing his Texas Rangers uniform.

The back of the card says “Juan was signed as Free Agent by Scout Luis Rosa.”. Looks like he was brought up in September of last year and finished with a .150 average with 1 hr and 7 RBI’s in 60 at bats. Juan Gonzales had a very nice career in the Major Leagues but did not make it to the Baseball Hall of Fame. He finished his career with a .295 average, 434 Home Runs, and 1404 RBI’s and won the MVP twice in 1996 and 1998.

This is the 1990 Topps Ken Griffey Jr. baseball card. It shows the young Griffey holding a bat ready to go up to the plate and hit a home run. The card also has a trophy on the front and says “Topps All-Star Rookie”.

The back of the card says “Ken graduated form Moeller (Cincinnati) High School in 1987. He played 3 years of football and 4 years of baseball. Was Baseball Player of the Year twice.”. Ken Griffey Jr. hit .264, hit 16 home runs, and 61 RBI’s during his rookie campaign in 1989.

The 1990 Topps Larry Walker Rookie card shows the hall of famer crouching down waiting for his turn at the plate. He is wearing his Montreal Expos uniform and hat.

The back of the card says “Larry was signed for the Expos by Scott Bob Rodgers.”. It looks like Larry Walker was brought up to the majors in August last year, but did not play until September. Larry Walker’s stats for the year is a .170 batting average, 0 HR’s, and 4 RBI’s. There is much more to come for Larry Walker in the future!

This is the 1990 Topps Bernie Williams rookie card. It shows Bernie wearing his New York Yankees pinstripes while posing.

The back of the card says “In 1986 Bernie led Gulf Coast League with 45 Runs.”. The only stats for Bernie is minor league stats because he has yet to play in the MLB. Bernie Williams would go on and play for 16 seasons and finish with a .297 batting average, 287 Home Runs, and 1257 RBI’s. Great career for this Yankee but did not get into the Baseball Hall of Fame.

The 1990 Topps Sammy Sosa rookie baseball card shows him swinging the bat during a game for the Chicago White Sox.

The back of the Sammy Sosa rookie card shows his minor and major league statistics but does not say anything about him. In 1989 he would hit .273, 3 Home Runs, and 10 RBI’s in 33 games.

This is the 1990 Topps Frank Thomas rookie baseball card. It shows Frank playing first base for Auburn university trying to tag someone out.

The back of the card says: “Frank was All-Southeastern Conference selection at first base for 3 years at Auburn University. In 1989 he led SEC in Batting and RBI while ranking 2nd in Home Runs. Frank’s 49 Roundtrippers represents an Auburn record. He set another Auburn standard with 73 Base on Ball last season while posting a .575 On-Base Pct. Frank was a teammate of Royals’ Bo Jackson on the Auburn Football Squad as a freshman”.

The 1990 Topps Frank Thomas error rookie card is an error because it does not show “FRANK THOMAS” in the blue name spot. Somehow it was missed. This card is worth thousands because there are not that many available.

The 1990 Topps Baseball cards set has hall of famers like Tony Gwynn, John Smoltz, and Nolan Ryan. But also has some nice rookie cards, although not hall of famers, like Juan Gonzalez, Bernie Williams, and Sammy Sosa. But the best card is the Frank Thomas error rookie card. For insights into the art of sports card collecting, visit Sports Cards Authority.