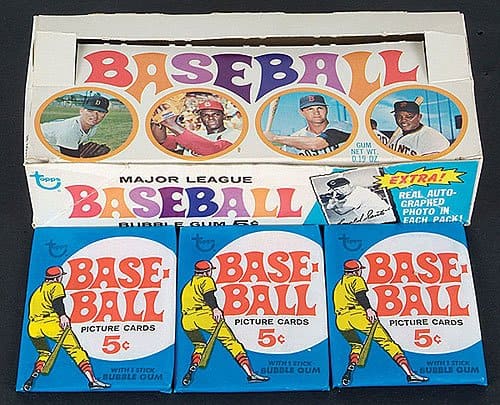 The 1969 Topps baseball cards complete set consists of 664 cards and each card measures 2 1/2″ x 3 1/2″. Each card has a large color photo of the player with a white border followed by a black skinny border. Then there is a circle with a solid color background that has the players name and position inside. The bottom of the card shows the team name.

What Are The Best 1969 Topps Baseball Cards?

There are some really nice hall of famers and rookies in this beautiful Topps set. From Reggie Jackson’s rookie to a Mickey Mantle error card, and then other hall of famers like Nolan Ryan and Willie Mays, they all are actually great. Here are the best.

This is the 1969 Topps Roberto Clemente error card (shows “bats” twice in the back) and it contains a full color photo of Roberto holding a bat wearing his Pittsburg Pirates uniform.

The 1969 Topps Johnny Bench shows the hall of fame catcher crouching down like he is playing catcher and wearing his Cincinnati Reds uniform. The card also has a trophy and says Topps 1968 All-Star Rookie.

The back of the card says a lot about Johnny like he is one of the coming stars in the major leagues, Johnny came to the Reds after being voted The Minor League Player of the Year in 1967. There is also a cartoon showing a player carving a date in his bat and it says “Johnny’s first big league homer came on Sept. 20, 1967.”. His stats for 1968 show he hit .275, hit 15 homers, and 82 RBI’s. Because of his great hitting, he also won the Rookie of the Year.

This is the 1969 Topps Tom Seaver baseball card and it shows the young hurler in a full color photo wearing his New York Mets uniform and cap.

The 1969 Topps Hank Aaron has a full color photo of him posing for the camera holding a baseball bat.

The back of the card says “Last season, Hank wielded his usual potent tomahawk and became only the 8th player in baseball to reach the 500 homer plateau.”. There is no cartoon on the back because of all the stats for all the years that Hank Aaron played. It does show that his previous year, 1968, Hank hit .287, 29HR’s, and 86 RBI’s.

This is the 1969 Topps Rollie Fingers rookie card. It is a subset called “1969 Rookie Stars” for the American League. The card also has Bob Floyd and Larry Burchart, but the main player is Hall of Famer Rollie Fingers for the Oakland Athletics.

The back of the card shows that Rollie Fingers is a pitcher for the Oakland Athletics. It shows his Minor League Lifetime Pitching Record. He had a 2.78 ERA, 414 Strikeouts, and 35 Wins with 544 Inning Pitched.

The back of the card says “Only Babe Ruth ever hit more big league homers than Willie!”. There is also no cartoon for him because of all his stats that the card shows. It is now near the end of Willie Mays career, but the previous year he hit .289, 23 HR’s, and 79 RBI’s. And up to this point Willie Mays has 587 career home runs. But we all know that he finished his career with 660 Home Runs.

This is the 1969 Mickey Mantle baseball card. It shows “The Mick” standing and holding his bat ready to hit a home run with the New York Yankees. This card is the fixed error card, it shows “Mantle” in yellow. The more sought after one has “Mantle” in white.

The back of his card says “Mickey is 3rd on the All-Time Home Run list! The All-Star announced his retirement from baseball on March 1st, 1969!”. So this card actually shows his career totals, which include 536 Home Runs and a career .298 batting average.

The 1969 Nolan Ryan baseball card shows him in a pitching stance posing for a picture and wearing his New York Mets uniform and hat. This iconic card was shown during his induction into the Baseball Hall of Fame in 1999.

The back of his card says “Blessed with blazing speed, Nolan unleased his fastball at Greenville in ’66 and paced the Western Caroline League with 17 wins and 272 strikeouts. He was named the circuit’s top pitcher.”. The cartoon in the upper right shows a catcher holding his glove with fire coming out and it says “In 1968, Nolan set a Met record as he fanned 14 batters in a game.”. The back also shows that Nolan Ryan finished the 1968 season with a 3.09 ERA, 133 strikeouts, and 6 wins over 134 innings.

The 1969 Topps Mickey Mantle baseball card with “Mantle” in white is a scarce baseball card of the great Yankee. This card shows Mickey holding a bat ready to swing.

Some people believe that the White Mantle card was only released in certain parts of the country. Plus this is the last year for Mickey Mantle, so this is his last baseball card before he retired.

This is the iconic 1969 Topps Reggie Jackson rookie baseball card. It shows “Mr. October” wearing his Oakland Athletics uniform and hat while posing for a photo.

The back of the card says “The Athletics were excited with the fantastic progress shown by this 22 year old in 1968. His 29 home runs was tops on the Athletics and 4th best marke in the American League. He also led Oakland with 74 runs batted in last year.”. The cartoon shows a better saying “I’ll wave to you from third!” because Reggie Jackson had 17 triples in S.A. in ’67.

The 1969 Topps baseball cards set has a lot of great Hall of Famers in Mickey Mantle, Willie Mays, and Nolan Ryan. But it also contains a few rookies in Rollie Fingers and the iconic rookie card of Reggie Jackson. As you can see the Reggie is the best in this set hands down!