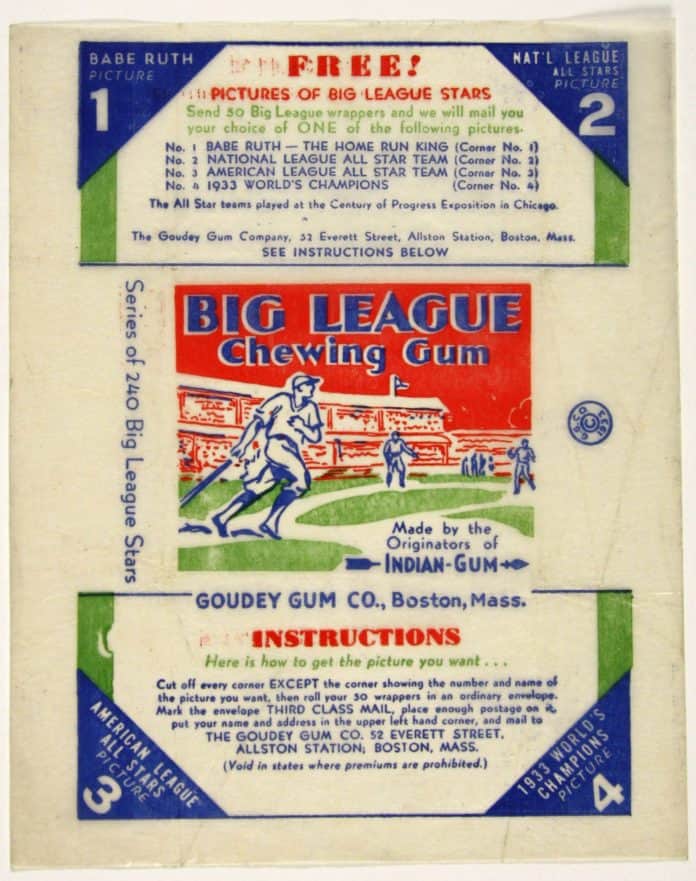 The 1933 Goudey Baseball Cards are one of the most popular baseball card sets ever produced. The set contains 240 cards and each card measures 2 3/8 x 2 7/8. There are an abundance of hall of famers in this set including four different Babe Ruth cards. Compared to the predecessors, Tabaco cards, these cards were much thicker and set the precedence for modern day cards.

The front of the 1933 Goudey baseball cards contained a nice colorful illustrations of the players, some in action and some not. The name of the players are in small fonts and all caps at the top of the cards. Most of the cards in the set also have “Big League Chewing Gum” inside of a red block.

The backs show the card number, the players name, and the team name at the top. Then there are a few paragraphs talking about the player. Then it says “This is one of a series of 240 Baseball Stars”. Then is says Big League Chewing Gum, Goudey Gum Co. Boston. Made by the originators of Indian Gum.

What Are The Best 1933 Goudey Baseball Cards?

The 1933 Goudy baseball cards contain many hall of famers like Lou Gerhig, Babe Ruth, and Jimmy Fox. Originally there was only 239 cards, but then an additional one of Nap Lajoie was added and probably the most difficult to get. Here are the best 1933 Goudey baseball cards.

This is the 1933 Goudey Dizzy Dean baseball card that has a nice illustration of Dizzy right after he threw a pitch wearing his St. Louis Cardinals uniform and cap.

The back of the card says he was named “Dizzy” several years ago because he made the White Sox that was trying to bat against him. In his second year in the National League he set a modern league strikeout record, when he fanned 17 Cubs in a game on July 30, 1933. It also says that the Cardinals signed him in the Fall of 1929 and farmed him out for more experience. In 1932 he won 18 games and lost 15 for St. Louis.

The 1933 Goudey Jimmy Foxx shows an illustration of him swinging the bat wearing his Philadelphia Athletics uniform and cap.

The back of the card says: “The player who’s giving Babe Ruth a battle for the title of Home Run King. He clubbed 58 homers in 1932 and finished only three points behind Dale Alexander as leading batter of the league.”

This is the 1933 Goudey Jimmy Foxx baseball card numbered 154. It shows him swinging the bat, probably after smacking a home run.

The back of the card says “A farmer boy in Sudlersville, Md., playing on the high school team before he got a chance to play professional ball. Played only one year in the minor league before he was brought by the Athletics in 1925. Was only 18 years old then. He used to be a catcher, but now plays first base. He bats and throws right-handed. Batted .364 in 154 games and fielded .994.

The 1933 Goudey Lou Gehrig baseball card shows an illustration of Lou about to swing his baseball bat while wearing his New York Yankees pinstripes.

The back of the card says: “One of the biggest siege guns of the New York Yankees. Hasn’t lead the American League in batting up until this year, but five times finished in the first five. Twice voted most valuable player in American League.”

This is the 1933 Goudey Big League Chewing Gum baseball card of Lou Gehrig. He is wearing his New York Yankees uniform and cap. Card 160 is worth more than card 92, even though they are the exact same other than number.

The back of the card says: “What a hitter! Last year swatted .349 in 155 g ames and smacked out 34 home runs. Used to do some pitching while playing for Columbia, but now confines his fielding to first base.” It also says “Born in New York City in 1903. Is a left hander, six feet, one inch tall and moves the weights at 200 pounds.”.

The 1933 Goudey Babe Ruth baseball card shows “The Babe” standing on the field swinging his bat while wearing his New York Yankees uniform and cap.

The back of the card says “Cost Red Sox less than $3,000 in 1914, but New York Yankees paid about $125,000 for him six years later. Stepped from industrial school in Baltimore to minor league ball and went to big league in less than a year.”. The back also says “Was star pitcher for several years, but now plays in outfield. Holds big league home run record, 60, made in 1927. Lead American League in abatting in 1924. Last year batted .341 and hit 41 homers.”.

This is the 1933 Goudey Babe Ruth baseball card that shows a closeup of Babe swinging the bat and a rich red background.

The 1933 Goudey Babe Ruth baseball card #181 shows a closeup of Babe Ruth holding his bat looking onto the field and wearing his New York Yankees pinstripes and brown cap.

The back of the card says “One of the keenest students of baseball, New York Yankees Home Run Star. He is also one of the hardest men to pitch to in a game. Box men say you can fool him on a certain ball once, but next time he gets it, he is apt to hit it out of the park. Before starring as a home run hitter, was rated as one of the best pitchers in the American League.”.

This is the 1933 Goudey Nap Lajoie baseball card that shows a close up illustration of him with a grin and then at the top left there is a small bluish cartoon showing a man stealing a base.

The back of his card say “One of the greatest second basemen in the history of baseball. He also ranked with the greatest hitters, and was the most graceful infielder ever to spear a grounder or toss out a runner bound for first base. Larry hit above .300 for 15 years in the National and American Leagues, and that was long before the lively ball was introduced.”.

The 1933 Goudey Babe Ruth baseball card #53 shows a close up illustration of Babe Ruth. In fact it is the exact same card as #149 but there is a yellow background on this card as comparted to red for the other. This card is the most valuable card of Babe Ruth of the 1933 Goudey four Babe Ruth cards.

Wow, there are some pretty awesome cards in this set. Including four Babe Ruth’s, three Joe Cronin, two Jimmy Foxx, two Roger Hornsby, and two of Carl Hubbell. The set was originally 239 cards, but there was public outcry so they added a Nap Lajoie card as 240. With prices skyrocketing, good luck trying to get any of these cards at a good price.