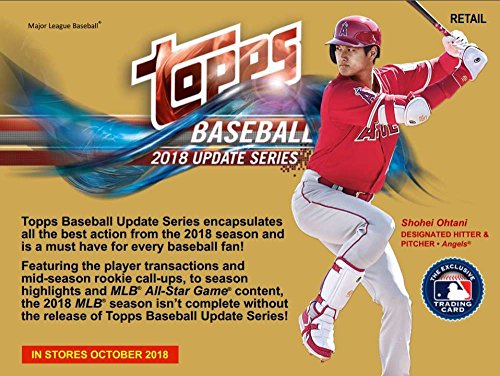 What Is the Best 2018 Topps Update Rookie Baseball Card?

Ronald José Acuña Blanco Jr. is a Venezuelan outfielder playing for Atlanta Braves. He signed a bonus of $100,000 as an international free agent. Acuna won the National League Rookie of the Year Award, and Silver Slugger Award. In the 2018 Topps Update card, Ronald Acuna Jr. is seen in action, after hitting the ball with his bat. The bottom left has the Atlanta Braves logo. The backside of the card has his minor league batting record.

Shohei Ohtani nicknamed “Shotime” is a Japanese pitcher, designated hitter, and outfielder for Los Angeles Angels. He was signed for a bonus of $2.315 million. Ohtani is a recipient of many accolades and awards in Japan’s Hokkaido Nippon-Ham Fighters team. He recently received the Athlete of the Year Award, Silver Slugger Award, and Edgar Martinez Award. In the card, he is seen in action, ready to throw the ball with all his might. The bottom left has the official logo of the Los Angeles Angels. At the backside, you can find his minor league record with his stats.

Juan José Soto Pacheco who is nicknamed “Childish Bambino” is a 23 years old Dominican outfielder. Soto plays for Washington Nationals. Juan Soto has recently extended his tenure with Washington Nationals for $17.1 million. His 2018 Topps Update card shows him ready to swing his bat and hit the ball. The official logo of the Washington Nationals is on the left bottom side. The backside features Soto’s minor league records.

Shane Robert Bieber is a professional American starting pitcher for Cleveland Indians. Being drafted in 2016, Shane Bieber recently signed a $6 million contract renewal. He received American League’s 2020 Cy Young Award. In the card, Shane Bieber is seen ready to pitch and throw the ball. The official logo of the Cleveland Indians is on the left bottom side. Shane Bieber’s minor league records can be read at the backside of his 2018 Topps Update card.

Gleyber David Torres Castro is a Venezuelan second baseman and shortstop for New York Yankees. The 25 years old Torres joined as an international free agent for $1.7 million with Chicago Cubs. Gleyber Torres’s rookie card in the 2018 Topps Update shows him after hitting the ball with his bat. Instead of his team’s official logo, the left bottom side has the All-Star Game logo. The backside has his minor league batting record.

Austin Wade Meadows is an American professional outfielder, playing for Tampa Bay Rays. He was traded from Pittsburgh Pirates to Tampa Bay Rays. In the 2018 Topps Update card, Meadows is seen running after hitting the ball. On the left bottom side is the official logo of the Tampa Bay Rays. At the backside of the card, you can find his minor league batting records.

Tyler Alan O’Neill is a Canadian professional left fielder, playing for St. Louis Cardinals. In the 2013 draft, Tyler O’Neill was selected by Seattle Mariners. However, later he was acquired by St. Louis Cardinals. In 2020, O’Neill won his first Gold Glove Award. In the 2018 Topps Update card, Tyler O’Neill is seen running with celebration. His team official logo is located on the bottom left side. The backside of the card features his minor league decorated record.

Michael Robert Tauchman is a professional American outfielder for Hanwha Eagles. He was selected in the 2013 draft with Colorado Rockies. Later, Hanwha Eagles acquired him for $1 million. The Mike Tauchman card shows him getting ready with his bat to swing and take a shot. The bottom left side has the official logo of the Colorado Rockies, for whom he played at that time. The backside features his minor league batting record with the stats.

Michael John Graydon Soroka is a Canadian professional pitcher for Atlanta Braves. The 24 years old Soroka is a recipient of the Tip O’Neill Award. He signed a contract of $2.8 million for 2022. His card shows him throwing the ball to fielders. At the bottom left side is the official logo of the Atlanta Braves. The backside has the minor league pitching record of Michael Soroka along with his stats.

Jordan McKinley Hicks is an American professional baseballer for St. Louis Cardinals. He is a pitcher for the Cardinals, who got drafted in 2015. He signed a contract of $600,000 with the St. Louis Cardinals. The 2018 Topps Update card shows him pitching the ball and ready to win the game. The bottom left side has St. Louis Cardinals official logo. Whereas, the backside of the card has his minor league pitching records and stats.

These are some of the top and incredible rookie players who are thriving and excelling in their careers. The time is not far when these baseball players will become the most celebrated players in Major League Baseball. They will follow the legacy of legends like Ty Cobb, Hank Aaron, Earnie Banks, Babe Ruth, Honus Wagner, Mickey Mantle, and others.

Baseball fans are excited to witness Ronald Acuna Jr., Shohei Ohtani, Juan Soto, Shane Bieber, and others reach new heights. The stardom for such incredible and smart players is not far. Let us wait and watch how these players turn out to be in the 2022 season. We hope the best for them and their respective teams.