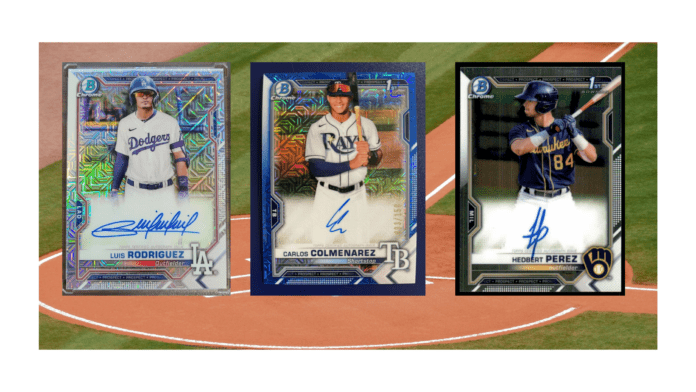 What Is the Best 2021 Bowman Chrome Prospects Autograph Baseball Card?

Christopher Austin Martin is a 23 years old professional shortstop. He started his career with Toronto Blue Jays, where he was acquired for a $7 million bonus. But he is currently associated with Minnesota Twins, where he was traded from Blue Jays to the Twins team. The beautiful 2021 Bowman Chrome Prospects card of Austin Martin shows him running. At the bottom is his name and above it is his autograph for the fans. The backside features his college batting record.

Cristian De Jesus Hernandez is a Dominican professional shortstop player. He is just a 19 years old baseball player, acquired by Chicago Cubs. The 2021 Bowman Chrome Prospects card of Cristian Hernandez features him in action, ready to take a swing. The bottom of the card has his name, and above is his decorated signature. The back of the card has his college batting records.

Spencer Enochs Torkelson is a professional American first baseman and third baseman. The 22 years old Torkelson plays for the Detroit Tigers, he was drafted in 2020 for a whopping signing bonus of $8,416,300. Spencer Torkelson’s prospect card shows him in action. At the bottom of the card is his name, and above is his autograph for the fans. The backside of the card features his college batting record.

In 2020, Blaze Jordan was drafted as the third baseman for Boston Red Sox. He was selected right after school. His 2021 Bowman Chrome Prospects card shows him in action, ready to dive and catch the ball. Below is his name along with the position at which he plays for Boston Red Sox. Above it is his autograph. At the back of the card is his high school batting record.

The 18 years old Carlos Manuel Colmenarez is a shortstop, designated hitter, and centerfielder for Tampa Bay Rays. The young Venezuela player was drafted by Tampa Bay Rays. In the baseball card, Carlos Colmenarez is seen smiling while holding his bat with confidence. Below is his autograph and then his name, with Tampa Bay Rays’ official logo. The backside of the card has his batting record along with his skill set.

Luis Rodriguez is a Venezuela outfielder for Los Angeles Dodgers. He was drafted in 2019 and signed a bonus of $2,667,500 with the Dodgers. In the card, Luis Rodriguez is seen standing in the field. Below is his in-card autograph, and below is his name and the position for which he plays in Los Angeles Dodgers. At the backside of the card, you can find his minor league batting record, with Bowman briefing for his career.

Reginald Jamel Preciado is a shortstop and third baseman from Panama. He was acquired by San Diego Padres and later by Chicago Cubs. The 18 years was initially acquired for $1.3 million by San Diego Padres. Later, with an exceptional signing bonus of $1.5 million, Reginald Preciado joined Chicago Cubs. In his 2021 Bowman Chrome Prospects baseball sports card, you can see him with confidence after taking a shot. At the end of the card, you can find his name, and above is his signature. When you flip the card, fans can read his minor league batting record.

Being 18 years young Hedbert Alessander Perez outfielder for Milwaukee Brewers. He was acquired for $700,000. His baseball card has him standing perfectly after taking a sharp swing. At the bottom, you will find his name and above his decorated autograph. On the backside, fans can find his minor league batting record.

The 22 years old Cuban outfielder from San Francisco Giants is a professional MLB player. He was acquired by Giants for $975,000. The 2021 Bowman Chrome Prospects card of Jairo Jeffry Pomares shows him eying the ball after taking the shot. At the bottom of the card is his name, and above is Pomares’ signature. Behind the card, you can see his minor league batting record.

Pedro Manuel León is a Cuban centerfield professional baseball player. The 23 years old was acquired by Houston Astros. He signed a bonus of $4 million in 2021. In the card, Pedro Leon is seen ready to take a swing. At the bottom is his name, while above is Leon’s in-card autograph. Behind is his batting record along with his skills.

These are the top 10 baseball autographs fans are crazy about. The 2021 Bowman Chrome Prospects features incredible players who are working hard to become the next sensation of Major League Baseball.

Among these players, many have already changed the history of MiLB (Minor League Baseball). They are ready to take MLB by storm and follow the legacy of veteran baseball players. Whether it is Austin Martin or Spencer Torkelson, Blaze Jordan, Hedbert Preciado, or Pedro Leon, everyone is working hard to become stars.

Hank Aaron believed that the new generation can have the ability to become Home Run King. When Barry Bonds broke his record and received the title, he visioned seeing others on the same step. These exceptional prospects do have the potential to be what Aaron dreamt of.