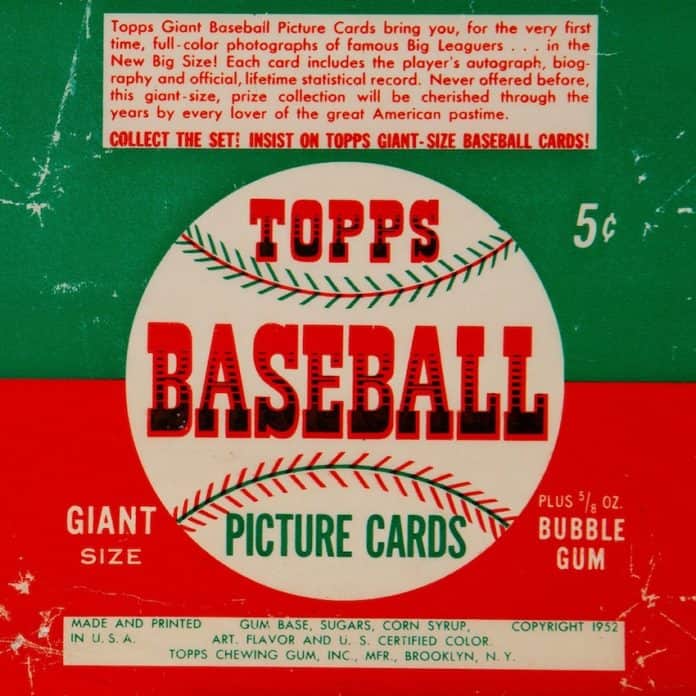 The 1952 Topps baseball cards is the most popular and most collectable vintage set. It contains one of the most iconic baseball cards in Mickey Mantle. His card sells for over a million dollars.

The cards themselves are beautiful and a total complete makeover from Topps first issued cards in 1951. Each card measures 2 5/8″ x 3 3/4″. The set consists of 407 cards and the cards were issued in six distinct “Series” groups. Series 1 and 2 consisted of card number 1 – 80 and had either a red or black back and were not short printed which means these can be commonly found. Series 3 and 4 of the 1952 Topps Baseball cards set consisted of cards 131 – 190 and appear in the standard “cream” colored back or the rare “gray back” variation. The high number series consisted of card number 311 – 407 were released late and in small numbers and also contained a good amount of the stars including Mickey Mantle.

What Are The Best 1952 Topps Baseball Cards

The 1952 Baseball cards set is filled with some great rookie and some great stars that are all priced high and very hard to find for a reasonable price. Obviously the Mickey Mantle is the power house in this set. But there are also stars like Jackie Robinson and Willie Mays and rookies like Eddie Mathews and Hoyt Wilhelm.

This is the coveted 1952 Topps Mickey Mantle rookie baseball card. It is one of the top 5 sports cards in price and demand. These cards demand more than 1 million dollars in top condition. The front of the 1952 Topps Mantle is a picture of the Mick holding a bat with a look to kill. It shows a team logo at the bottom along with a box bordered by yellow stars that has his name and then a facsimile autograph of Mickey Mantle.

Mickey Mantle cards are the top collectable baseball cards, and the 1952 is the number one to collect. That is because Mickey Mantle is one of the best players to ever play the game of baseball in the Major Leagues. In 1953 the term “tape measure home runs” was originated from one of Mickey Mantle’s home runs. He played center field and is the best center fielder to ever play. Mickey had a combination of power and speed, and also hit for average. He hit more than .300 ten times in his career. In 1956 Mickey Mantle won the Triple Crown by leading the majore leagues in batting average (.353), home runs (52), and RBI’s (130). To summarize his great career, Mantle was and all-star 16 times, was an American League MVP three times, and appeared in 12 World Series including 7

The 1952 Topps Willie Mays baseball card has a picture of him on the front of the card wearing his New York Giants hat and uniform showing a serious look. The back of the card states that Willie Mays was the National League Rookie of the Year in 1951.

Willie Mays is considered one of the best all time major league baseball players. He is a two time Most Valuable Player, in 1954 and 1965, and was runner up twice. Willie, also known as “The Say Hey Kid” lead the league in home runs 4 times and stolen bases 4 times, showing how versatile he was. One of the most famous plays of all time is when Willie Mays caught an over the shoulder baseball while running back to the fence in game 1 of the 1954 World Series. That year was the only Word Series win for Mays. Willie Mays finished his career with a .302 batting average, had 660 home runs (six most all-time), and 1903 RBI’s. He holds the Major League record for most putouts (7095) and most extra-innings home runs with 22.

This is the 1952 Topps Eddie Mathews rookie baseball card. It has a nice picture of Eddie wearing a Boston Braves hat and uniform along with the team logo of an Indian and his name and facsimile autograph. The back of the card talks about how Eddie Mathews first and last minor league team was Milwaukee.

Eddie Mathews is the only player to play for all three Braves teams (Boston, Milwaukee, Atlanta). He played for the Milwaukee Braves for the majority of his prime. He won the National League home run title twice in 1953 and 1959, and during those seasons he ended up runner up for Most Valuable Player. Known as one of the best third basemen to play Eddie Mathews finished his career with 512 home runs and was an all-star for 9 season.

This is the 1952 Topps Andy Pafko baseball card. It has a picture of him wearing his new Brooklyn Dodgers uniform and has a smile. Topps decided to put Andy Pafko as card number 1 in the set because of his good 1951 season that sparked an eight player trade between the Chicago Cubs and Brooklyn Dodgers. Because it was the first card, and because most kids from that time wrapped their cards in rubber bands, the And Pafko was always the first card in the rubber band stack and because of that there are very few around in good condition.

Andy Pafko had a decent career, but is not a hall of famer. He was an all-star for four season between 1947 and 1950. During those four seasons he was one of the better hitters in baseball. He had a few more good years and then his playing days were starting to diminish. But he did finish his career with a .285 averageand hit 213 home runs.

The 1952 Topps Roy Campanella show a picture of his wearing a blue Brooklyn Dodgers cap and uniform with a bright yellow background. The back of the card states that “Campy” is recognized as one of the greatest fielding catchers of all time.

Roy Campanella started playing professional baseball at the age of 15. He played in the Mexican League and Negro Leagues for nine years before entering the minor leagues in 1946. Roy played with the Brooklyn Dodgers from 1948 to 1957. He ended his career in 1957 because he was paralyzed in an auto accident. During his short MLB career, he was in 11 all-star games, was a 3 time Most Valuable Player (1951, 1953, and 1955), and was inducted to the baseball Hall Of Fame in 1969.

This is the 1952 Topps Jackie Robinson baseball card. The card shows Jackie wearing a Brooklyn Dodgers uniform while holding a bat and smiling. The back of the card states that Jackie Robinson was the National League Rookie of the Year in ’47.

The 1952 Topps Hoyt Wilhelm shows the knuckleballer wearing a New York Giants uniform and hat. The back of the card tells a story that Hoyt is a year Infantry Veteran and was wounded in the Battle of the Bulge.

Hoyt Wilhelm was 29 years old when he finally made it to the Major Leagues. Although he was a starter for part of his career, he was mostly a reliever. Also known as “Old Sarge”, Hoyt was the first pitcher to get 200 saves and the first pitcher to appear in 1000 games. It was mainly because of the knuckleball that Hoyt Wilhelm was able to play in the MLB until he was 49 years old. When he retired, Hoyt had one of the lowest career ERA’s for a pitcher with 2.52 ERA.

Also known as “The Cuban Comet” and “Mr. White Sox”, Minnie Minoso was a Cuban professional baseball player. Minoso was an All-Star for seven seasons with both the Indians and White Sox and was a 3 time gold glove winner while in his 30’s. In his career, Minnie Minoso batted over .300 eight times, lead the American League in triples and stolen bases 3 times, and once each for doubles, hits, and total bases. Along with Willie Mays, Minnie was credited with brining back stolen bases as an offensive weapon in the 50’s and 60’s.

Here is the 1952 Topps Tony Bartirome rookie baseball card. It shows Tony wearing the Pittsburg Pirates uniform and hat. The back says that Tony’s bound to be a favorite of the Pirates because he is a local product.

Tony Bartirome played only one season in 1952 at age 19 years old. He then left baseball briefly to join the Army until 1955. Tony then played only in the minor leagues until 1963. But Tony became the trainer of the the Pirates for nearly two decades and helped them win World Series in 1971 and 1979. When he passed away in 2018 his obituary hailed him as the only man in Major League history to serve as a player, coach, and trainer.

This is the 1952 Topps Pee Wee Reese baseball card. The front shows a great picture of Pee Wee wearing his Brooklyn Dodgers uniform and hat. The back of the card states that Pee Wee, the Dodgers Captain, has been their regular shortstop since ’40, except for the 3 years he spent in the service.

“Pee Wee” Reese is a Hall of Fame shortstop for the Brooklyn and Los Angeles Dodgers from 1940 to 1958. He was a 10 time all-star and was a key player for seen National League championships for the Dodgers. Reese is also known for his support he gave to help Jackie Robinson during his difficult first years of becoming the first black player in the Major Leagues.

By far the most cherished set of all time is the 1952 Topps Baseball cards. But because they are cherished, they go for a lot of money. In fact in 1986 there were more than 5000 gem mint cards found in a collection and in that were 75 or so Mickey Mantles. Missing from the 1952 Topps baseball cards set is Ted Williams and Whitey Ford, both were in the armed forces. And Stan Musial was in a contract with Bowman and could not be on a Topps card.