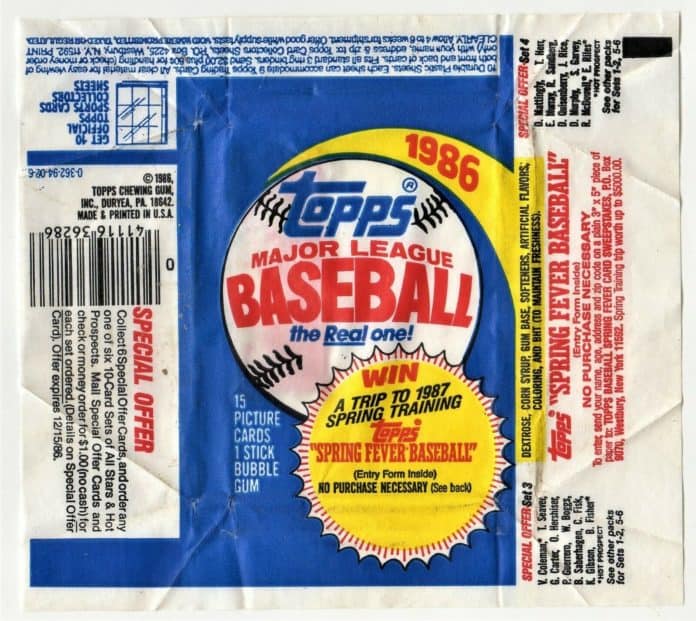 Welcome to the beginning of the junk wax era! Even though these cards are low priced cheap cards, you can get some really nice hall of famers at bargain basement prices in the 1986 Topps baseball cards. With that said, there are still a lot of people that collect junk wax just because of what I said earlier, you get a lot and pay a little. Especially the kids that grew up in the 80’s, those are the main collectors of these cards, and even packs and boxes.

The 1986 Topps baseball card set had a total of 792 cards and each card measures 2 1/2″ x 3 1/2″. The front of the card had a white border, but at the top of the card the border was black and very distinctive. It contained a large color photo of the player along with his team name in large bold lettering at the top. The bottom contained a circle with the players position and then the name of the player in black uppercase letters at the very bottom. The back of the card is a semi bold red color with black and off white throughout and contains the complete major and minor league record for the player. It also contains all the detailed information about the player like his height, weight, throwing and hitting hand, draft position and year, born, and home.

Below we review our best 10 baseball cards in this set. Maybe it contains your favorite cards from that year, and maybe they don’t. For example Robin Yount and Vince Coleman are not included. Should they be?

The 1986 Topps Roger Clemens is his second year card and that is why it’s considered the number one card. Even though not his rookie but still a nice card for the star pitcher. Clemens won seven Cy Young awards (1986, 1987, 1991, 1997, 1998, and 2001) an MVP and two pitching triple crowns. With his 2004 Cy Young award win he joined Pedro Martinez, Randy Johnson, and Gaylord Perry ad the only pitchers to win in both the National League and American League. The question remains whether or not Roger Clemens will ever get inducted into the Hall of Fame because of his steroids use. The only way he can get elected is by the Hall of Fame’s Today’s Game Committee.

This is the 1986 Topps Nolan Ryan baseball card. Although it might seem like this is the end of Nolan Ryan’s career, he still plays for eight more seasons. The photo on the card shows a very serious look by Nolan Ryan sporting his Houston Astros uniform. Nolan Ryan played in 27 seasons, which is more than any other player in modern history (after 1900). He ranks first all-time in strikeouts with 5,714, seven no hitters, and fewest hits per min innings at 6.56. But then there are the negative records that most people just ignore but he is first all-time in walks and wild pitches, third in losses and ninth in hits batters. He was also the first pitcher to give up ten grand slams over a career. So while some think of Nolan Ryan as one of the best all-time, others put up a good argument that maybe is isn’t even a top ten all time. What’s your take?

The 1986 Topps Cal Ripken has a great photo of him wearing his black Orioles uniform getting ready for batting practice. Sometimes he was refered as “the man of 1,000 stances” because he never had his own unique batting stance like most other major league players had. He often changed his stance throughout his career. When he was asked why he always experiments with batting stances he replied “was only a starting point”. Cal Ripken also had a brother, Billy, who actually played on the same team with Cal and is only one of four brothers to do so. In January of 2007 Cal Ripken was elected to the baseball hall of fame with only 8 votes shy of a unanimous selection.

This is the 1986 Topps Ozzie Guillen Rookie Card. It was a hot card in ’86 because Ozzie won the Rookie Of The Year award in 1985 by batting .273 and scoring 71 runs for the Chicago White Sox. Even though he only won one gold glove award he was still considered one of the best defensive shortstops of his era. Ozzie Guillen was a very well respected player because of his high intensity and passion and love for the game. In his 16 year career he made three all-star appearances and won that one gold glove award. But later he became a manager for the White Sox and was the first Latino manager in major league history to win a World Series.

The 1986 Topps Don Mattingly is his second year card. This card shows Don after he hits the ball and is about to run to first base. The year prior, 1985, Don Mattingly won the Most Valuable Player for the American League by hitting .324 and leading the league in doubles, RBI’s and total bases. He also had 35 home runs and 211 hits to go round off the stellar year. For his career Don Mattingly has 2,153 hits, 222 home runs, 1,099 RBI’s, 1007 Runs and a career .307 batting average. Are those numbers good enough for the Hall Of Fame? Some think so because of his shortened career. What do you think?

The photos on the 1986 Topps baseball cards are some of the best, and this is no exception with the 1986 Topps Mike Schmidt card. In 1985, Mike had a good year, but did not make the all-star team even though they were comparable to the year before when he was seventh in MVP voting. He finished ’85 with .277 average, 33 Home runs, 93 RBI’s, pretty good numbers. Throughout Mike Schmidt’s career he had ten gold gloves, one MVP award, he lead the league in home runs eight time, lead in RBI’s four times and was named to twelve all-star games. Did you know that Mike Schmidt has raised over $1.5 Million dollars for cystic fibrosis by sponsoring an annual fishing tournament? Great job Mike!

Here is the 1986 Topps George Brett baseball card showing him walking up to the plate ready to hit a line drive in the gap. In 1985 George was runner up as MVP by leading the league in SLG and OPS, which was calculated from his 38 doubles, 30 HR’s, 112 RBI’s, and 103 Walks to go with his .335 batting average. Great season for George. Bill James, a well known baseball historian, puts George Brett as the second best third baseman of all time right behind Mike Schmidt. I think most would agree.

The 1986 Topps Kirby Puckett shows a photo of him swinging the bat for the Minnesota Twins. Last baseball season, 1985, Kirby was one hit shy of 200 hits and batted a respectable .288. Not bad for his second year in the MLB. Kirby Puckett played for only 12 years in the Major League’s and ended his career with a lifetime .318 and had 2,304 hits. He also made the all-star team 10 of those years because during that time he was the best hitting centerfielder in the American League.

The 1986 Topps Cecil Fielder baseball card is his rookie card. Cecil was a power hitting first basemen best known for his three all-star seasons with the Detroit Tigers where he lead the league in homeruns twice and RBI’s three times. He had a nice 13 year career and ended up hitting 319 homeruns and 1008 RBI’s while twice coming in second for Most Valuable Player of the American League. In 1996 he was traded from Detroit to the New York Yankees where he won a World Series ring.

This is the 1986 Topps Ryne Sandberg baseball card of the Hall of Famer from the Chicago Cubs. In 1985 “Ryno” batted .305, hit 26 home runs, 83 RBI’s and made the all-star team for his second time. He also won a gold glove for being the best second baseman in the National League.

Welcome to the junk wax era. The 1986 Topps baseball card set is a very nice looking set that contains a lot of hall of famers. The rookie cards in this set include: Lenny Dykstra, Ozzie Guillen, and Cecil Fielder. Some of the subsets included in this nice set are All-Stars , Turn Back To Clock, Record Breakers, and a Pete Rose Tribute.