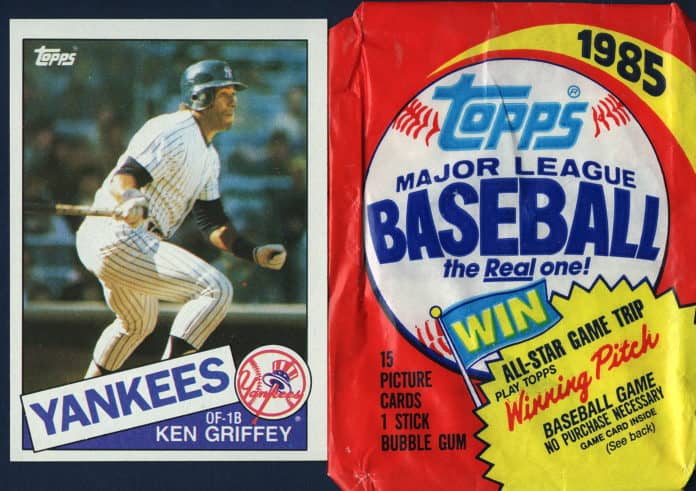 The 1985 Topps baseball cards were always one of the top sets in the 80’s because of Roger Clemens and Mark McGwire rookie cards. And during the 80’s there was the Dwight Gooden rookie also, but that took a hit when his career took a hit. If not for steroids, both Roger Clemens and Mark McGwire would be considered two of the best to ever play in the mlb.

There are a total of 792 cards and each one measures 2 1/2″ x 3 1/2″. There is a white border around the player photo and then the team name printed angles and in rich color. To the right of that is the team logo and then below is the player name and abbreviated position. The back of the cards are green with red print and it shows all the player info like weight, height, throws, bats, when they were drafted, and complete major and minor league statistics.

The 1985 Topps Roger Clemens is his rookie card and highly collectable even though he is not in the hall of fame. The card contains a nice picture of “Rocket” representing the Boston Red Sox. On the back it states that Roger refused basketball offer from Seattle Supersonics and the Boston Celtics. Roger Clemens is considered by many to be one of the greatest pitchers to ever play in the Major Leagues. Roger was a 7 time Cy Young winner, he lead the league in wins 4 times, ERA 7 times, and strikeouts 5 times. Career wise Roger won 354 games, has a career 3.12 ERA, and the third most strikeouts all time with 4,672.

The 1985 Topps Kirby Puckett is his rookie card. The card contains a nice photo of him batting with the Minnesota Twins, for whom he spent his entire career with. Kirby only played 12 seasons in the mlb because at age 36 he developed a central retinal vein occlusion that caused loss of vision from one of his eyes. Even though only playing 12 seasons, Puckett was elected to the Baseball Hall of Fame on his first year of eligibility. Kirby Puckett was an all-star 10 times, lead the league in hits 4 times, RBI’s once, and batting average once. He ended his career with a staggering .318 career batting average, which was the highest career average for a right hander since Joe DiMaggio.

The 1985 Topps Mark McGwire baseball card was one of the most popular and coveted rookies of the 80’s. But these days it is no longer because of the fact that he was a major steroids user. Take away the steroids and Mark McGwire would be considered one of the greatest power hitters to play. He currently holds the Major League record for at-bats per home run ration of 10.6 (Mark hit a home run every 10.6 at bats). “Big Mac” also had a great eye for the ball and led the league in walks twice. But what really makes him great is that he ranks 11th in all time home runs with 583, and that would probably be a ton more if he wasn’t injured so much. Mark won the rookie of the year award after hitting 49 home runs his rookie year. Great hitter, too bad for sterioids.

All Nolan Ryan cards are very collectable, and that is no different for the 1985 Topps Nolan Ryan baseball card. Cool fact on the back of his card states that Nolan is involved in cattle breeding and in banking. Pretty smart guy. “The Ryan Express” is the career Major League leader in strikeouts with 5714. Probably the most dominant and toughest power pitcher in baseball history, he threw a career record 7 no-hitters spanning over three decades.

Here is the 1985 Topps Cal Ripken baseball card of the new “Iron Man” of baseball. Cal played in 2632 consecutive baseball games that took 17 years to accomplish. Cal Ripken is considered one of the best shortstops to ever play the game. He won rookie of the year award in 1982, and then two MVP awards in 1983 and 1991. Ripken holds the record for most home runs hit by a shortstop (345) that was previously held by Chicago Cubs shortstop Ernie Banks.

The 1985 Topps Don Mattingly is his second year card. It’s a great card that shows Don Mattingly on the base paths looks like he is ready to steal a base, even though he was not know for it. Don Mattingly was a New York Yankee his entire career and would definitely be in the hall of fame if not for his back problems that developed later in his career. From 1984 to 1989 “Donnie Baseball” was the most prolific hitter in baseball. During that time he made the all-star game every year, hit more than .300, and hit more than 35 home runs. He even won the MVP in 1985.

This is the 1985 Topps Orel Hershiser rookie card. After spending a few seasons in the minor leagues Orel Hershiser was welcomed to the Major Leagues in 1983. He pitched 12 seasons with the Los Angeles Dodgers and during that time he made three all-star teams and won the Cy Young award in 1988 after pitching 59 consecutive innings. Later that year Orel Hershiser would not only pitch in the World Series, but he would be the Most Valuable Player of the series.

The 1985 Topps Dwight Gooden baseball card is the rookie card of the “Doc”. Dwight was one of the leagues most talented pitchers early in his career. He was 19 years old during his rookie season, in which he won 17 games, had a 2.60 ERA, and lead the league in strikeouts with 276. He won the Rookie Of The Year and was runner up for the Cy Young award. Dwight Gooden’s second year was his best and he won the Cy Young that year in which he lead the league in Wins, ERA, Complete Games, and Strikeouts. Unfortunately Dwight Gooden’s career was derailed because of cocaine and alcohol addiction. But still he had a nice little career in the MLB.

The 1985 Topps Eric Davis baseball card is his rookie card. Eric Davis had great talent hitting, running, and with defense but was often slowed down because of injuries. At one point early in his career Eric Davis was probably the most exciting players to watch, in fact in 1987 he became the first player to hit more than 30 home runs and steal more than 50 bases. In 1996 Eric came back to play for the Reds and won the comeback player of the year award. He ended his career making two all-star games, hitting 282 home runs, and stealing 349 bases.

The 1985 Topps George Brett baseball cards shows a great picture of him after he just swung the bat and probably crushed a line drive for a double. George Brett has 3154 career hits that is second all-time for third basemen and 18th overall all-time. He is also the of four players in Major League history that had 3,000 hits, 300 plus homeruns, and a career .300 batting average. George Brett is the only player to win a batting title in three different decades.

The 1985 Topps baseball cards set is a great set from the 80’s. It had some really cool subsets, most importantly, the 1984 U.S. Olympic Baseball Team that contained the Mark McGwire rookie card that was worth quite a bit until steroids’ came into play and decreased a lot of the top players baseball cards. Even so, this set included some other great rookies along with a lot of great hall of famers.