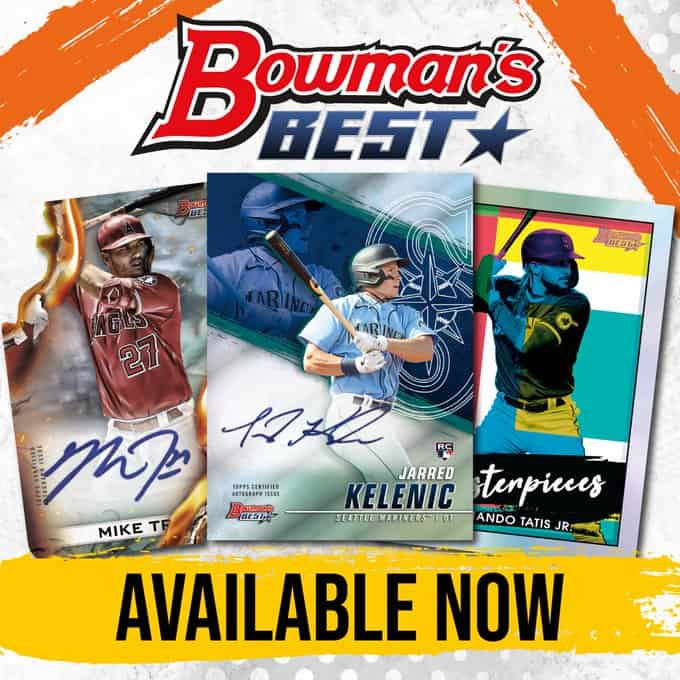 What Is the Best Card Of The 2021 Bowman’s Best Rookie Baseball Cards?

We are going to start from the lowest and reach the highest contender on the list.

Robert Andrew Witt Jr. was drafted in 2019 by Kansas City Royals. He plays as shortstop and third baseman on the team. Robert was acquired for $7.79 million. He has 3 RBIs so far.

In the 2021 Bowman’s Best rookie baseball cards Bobby Witt Jr. is seen in action after hitting the ball with all his might. At the top left is the ‘Bowman’s Best’ logo, and the bottom features the player’s name. On the backside of the card are details about the best career game of Bobby Witt Jr.

For a signing bonus of $1.75 million, Blaze Jordan got drafted in 2020. He plays as a third baseman for Boston Red Sox. Jordan has 2 home runs and 7 RBIs.

The sports card shows Blaze Jordan ready to strike and hit the ball with passion. On the top left side of the card, you can see the official logo of ‘Bowman’s Best’, and the bottom features Blaze Jordan’s name. The backside has details about Jordan’s best career game.

Jarred Robert Kelenic is a professional outfielder for Seattle Mariners. In the 2018 MLB draft, Kelenic was signed by New York Mets. However, later he got traded to Seattle Mariners. Jarred Kelenic has 14 home runs and 43 RBIs.

2021 Bowman’s Best rookie baseball card shows Kelenic ready to take a swing. At the top right side is the official logo of ‘Bowman’s Best’ and the bottom features player’s name. At the backside of the card, you can read about his best 2021 game.

Henry Davis is a Pittsburg Pirates catcher in the MLB. He got drafted in 2021 for a signing bonus of $6.5 million. To date, Henry Davis has 3 home runs and 7 RBIs.

The card shows Davis in action, ready to hit the ball with his bat. At the top left side is the official logo of ‘Bowman’s Best’ and the bottom features his name. Since he missed his games due to injury in 2021, the backside of the card includes the best college game for him.

Boston Red Sox drafted Marcelo Mayer in 2021. The professional shortstop was signed for a bonus of $6.66 million. Mayer finished his first MLB season with 3 home runs and 17 RBIs.

You will see Marcelo Mayer running in the 2021 Bowman’s Best rookie baseball cards. The top left side has the official logo of ‘Bowman’s Best’ and at the bottom is Mayer’s name. The backside has his best high school game memory.

The 2021 Bowmans’ Best rookie baseball card for Spencer Torkelson is an in-card autograph edition. The card features Torkelson ready to smash. The bottom right side of the card has his name, the bottom left side has the ‘Bowman’s Best’ logo, and above it is his signature.

Jordan Jeffrey-Joseph Lawlar plays for Arizona Diamondbacks as a shortstop. Lawlar was drafted in 2021 for a bonus of $6.7 million. 2021 was not great for him as he suffered from a left shoulder injury.

The card shows Jordan Lawlar getting ready with his bat. At the bottom of the card is his name, while at the top left side is the official logo of ‘Bowman’s Best’. The backside of the card features his best high school game, as he was unable to perform in the 2021 MLB season.

Jasson Domínguez is a Dominican baseballer playing for New York Yankees as an outfielder. Dominguez signed with the Yankees for a bonus of $5.1 million. He has 6 strikeouts and 6 walks.

The card features Jasson Dominguez in action, ready to take a swing. The top left side of the card has the ‘Bowman’s Best’ logo, while the bottom has his name. The backside features his best career game so far.

Harrison Michael Ford is a catcher for the Seattle Mariners who signed a bonus of $4.36 million with them. With 3 home runs, 10 RBIs, 7 doubles, 9 walks, and 14 strikeouts, Ford is an incredible player for Mariners.

In the card, Harry Ford is getting ready to hit the ball. At the bottom is his name, while the top left side has the ‘Bowman’s Best’ official logo. The backside features Ford’s best high school game.

Wander Samuel Franco Sr. is a shortstop and third baseman for Tampa Bay Rays. He has signed with the Rays for $180 million for eleven years. 7 home runs and 42 RBIs set him unique in Tampa Bay Rays.

In the card, Wander Franco is seen excited after taking the shot. The top left side has the ‘Bowman’s Best’ logo and the bottom has his name. The backside features his best career game record.

These are some phenomenal 2021 Bowman’s Best rookie baseball cards that are worth hundreds of dollars. If invested today, the chances of making them million dollars’ worth is high.