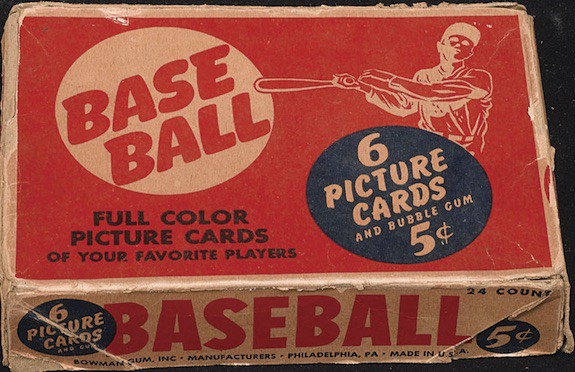 The 1951 Bowman baseball cards set is a very scarce set to collect but it includes a total of 30 hall of famers. The baseball cards measured 2 1/16″ x 3 1/8″ and was first released with 252 cards in the set. But down the road Bowman decided to add an additional 72 cards, and people are sure glad they did because those included the young starts Mickey Mantle and Willie Mays.

Each card featured a press photo that was then painted and that is what is shown on these beautiful cards. Included on the front of the card is the players name. The back of the cards feature the players name along with position, team, where and when the player was born, the players weight, and which hand they bat and throw with. There is also a paragraph talking about each player.

What is the best of the 1951 Bowman baseball cards?

We’ve included the top 10 1951 Bowman baseball cards here in order from good to great. There are a few rookies, a few hall of famers, and a few other players with significance that you can read below.

This is the 1951 Bowman Monte Irvin baseball card. It shows a nice picture of Monte wearing his New York Giants uniform ready to swing the bat. The back of the card talks about how Monte was brought up to the majors in a hurry. In the lineup in 110 games for the Giants. Hit an even .300. Drove in 66 Runs.

Monte played in the Negro leagues from 1938 to 1948 and then played with the Giants from 1949 to 1955 and finished his career with the Chicago Cubs in 1956. He is best known as the player that mentored Willie Mays, when Willie joined the Giants in 1951. In 1952 Monte Irvin lead the league in RBI’s with 121 and finished 3rd in MVP after Roy Campanella and Stan Musial. Monte Irvin was inducted into the Baseball Hall of Fame in 1973.

The 1951 Bowman Bob Feller has a colorful picture of him Wearing his Cleveland Indians jersey and hat with a very nice smile. The back of the card tells the story of Bob up until this time in history. Some of this includes: Set a modern major league record by striking out 18 batters in one 9-inning game. Holds record of 348 strikeouts in a single season.

Bob Feller was the most dominant pitcher of his time. He was the first pitcher to get 24 wins before the age of 21. Bob, also known as “The Heater from Van Meter” lead the league in strikeouts 7 times and wins 6 times. He also threw 3 no-hitters and 12 one-hitters, both records when he retired. Bob Feller ended his career with 266 wins, 279 complete games, 44 shutouts, and an ERA of 3.25. He was inducted into the Baseball Hall of Fame in 1962 with the fourth highest percentage in history at that time.

This is the 1951 Bowman Roy Campanella, the catcher for the Brooklyn Dodgers. The card shows him wearing his catchers equipment, throwing off his mask, and about to run to try catching a popup. Here is some of what the back of the card says: In 1949 – Roy’s second year in the majors – he lead NL catchers who were in 100 or more games with a fielding percentage of .985.

Roy Campanella is considered by many to be the best catcher to ever play that position. He won 3 Most Valuable Player awards and was an all-star for 8 of the 10 years he played in the MLB. Before playing in the Major Leagues, “Campy” played in the Negro Leagues and Mexican League for 9 years. His career abruptly came to an end when he was in an automobile accident. Roy was voted into the Hall of Fame in 1969.

The 1951 Bowman Larry Doby shows him standing at the plate ready to hit a home run for the Cleveland Indians. The back of the card shows facts about him. Like “Recorded a .326 battering average during 1950. slugged out 25 home runs. Drove 102 runs across the plate.

Larry Doby is the second person and first in the American League to break the color barrier. He was runner up for MVP in 1954, when the Cleveland Indians won 111 games and the World Series. He was also one of the first black players, along with Satchel Paige, to win a pennant, when they won in 1948. Larry was selected into the Baseball Hall of Fame in 1998 by the Veterans Committee and he died in 2003 at the age of 79.

This is the 1951 Bowman Duke Snyder baseball card. It features a picture of “The Silver Fox” swinging a baseball bat for the Brooklyn Dodgers. Here is a small portion of what the back of the card says: Paced the National League in 1950 in base hits (199) and in total bases (343). Batted .321, fourth NL high. Banged out 31 doubles, 10 triples, 31 homers.

Duke Snider is a Hall of Fame centerfielder who played most of his career with the Brooklyn/Los Angeles Dodgers. He helped the Dodgers to 6 world series and won tow of them, in 1955 and 1959. Duke was an all-star eight times and was the runner-up for the National League Most Valuable Player award. He lead the league in runs three times, hits once, and homeruns once. Duke Snider ended his career with 2116 hits, 407 home runs, 1333 RBI’s and was elected to the Baseball Hall of Fame in 1980.

This is the 1951 Bowman Nellie Fox rookie baseball card. It shows him wearing his Chicago White Sox uniform and cap. The back of his card states that he played in 130 games for the White Sox last season. Got 113 hits, batted in 30 runs, and had an average of .247.

Nellie Fox is still considered one of the best second basemen to play the game. He was an all-star for 12 seasons and won the American League Most Valuable Player once in 1959. Known not only for his great fielding, but for getting base hits. In fact he lead the league in singles 8 times, with 7 coming in a row. Nellie Fox ended his career with 2663 base hits, 3 gold glove’s, and fielding average for second basemen 6 times. He was inducted into the Baseball Hall of Fame in 1997.

The 1951 Bowman Ted Williams shows a picture of “The Splendid Splinter” swinging his bat. The back of the card says: Because of a broken elbow, received in the All-Star game, Ted was in only 89 games in 1950. But he made good use of those 89 appearances. He batted .317. Slammed 28 homers. Knocked in 97 runs.

Ted Williams is one of the top handful of players to ever play in Major League Baseball. He holds the all-time record for On Base Percentage. Ted won 2 Most Valuable Player awards and was runner up 4 times. He was also the last person to have a batting average over .400 when he hit .406 in 1941. Along with his career .344 average, he hit 525 home runs, 1839 RBI’s, and was inducted into the Baseball Hall of Fame in 1966.

This is the 1951 Bowman Whitey Ford baseball card that features the Yankees great wearing his New York Yankees pinstripes. The back of the card says: Joined the New York Yankees mid-way in tehir 1950 pennant drive. Wowed the fans by winning ine games while losing only one. Hung up a .900 percentage and an earned run average of 2.81.

Whitey Ford was a career New York Yankees pitcher and pitched for 16 seasons with them. Over that time he was a 10 time all-star, 6 time world series champ and in 1961 he won the Cy Young award for the best pitcher in the American League. Whitey is the career Yankees franchise leader in games started, innings pitched, shutouts, and career wins. Ford was inducted into the Baseball Hall of Fame in 1974

The 1951 Willie Mays Rookie baseball card features “The Say Hey Kid” wearing in New York Giants uniform and cap. The back of the card starts off saying: Signed by the Giants after graduating from high school in June 1950. Placed with their Trenton farm team. Appearing in 81 games batting .353.

Willie Mays is an all time great and this beautiful rookie card is a great representative of him. He lead the league in home runs 4 times, stolen bases 4 times and batting average once in his career. Willie won two MVP’s in his career in 1953 and 1964. He finished his career with a .301 batting average, 660 home runs, 1909 RBI’s and was inducted into the baseball Hall of Fame in 1979.

This is the 1951 Bowman Mickey Mantle rookie card that shows him in his batting stance ready to clobber the baseball. The back of the card says: Mickey is the Yankee rookie of whom so much is expected in 1951. Everyone was talking about him during the spring training in which he batted over .400. Kept on clicking when the regular season got under way.

Mickey Mantle is not only one of the best players and most popular players to ever play, but his baseball cards are also some of the best and most expensive on the market. The three time Most Valuable Player, and runner up three more times, lead the league in home runs four times and finished his career with 536 home runs. Mickey Mantle was induced into the baseball Hall of Fame in 1974.

The highlight of the 1951 Bowman baseball cards set is the Mickey Mantle rookie card. Yes, it’s not as good as the 1952 Topps card, but this is the next best of a Mickey Mantle card. Also in this set features the Willie Mays rookie also, which is another highly sought after card. Other than those two this set also contains Yogi Berra, Pee Wee Reese, and Warren Spahn. The 1951 Bowman baseball cards is a great set to own, or just some great hall of famers to own.