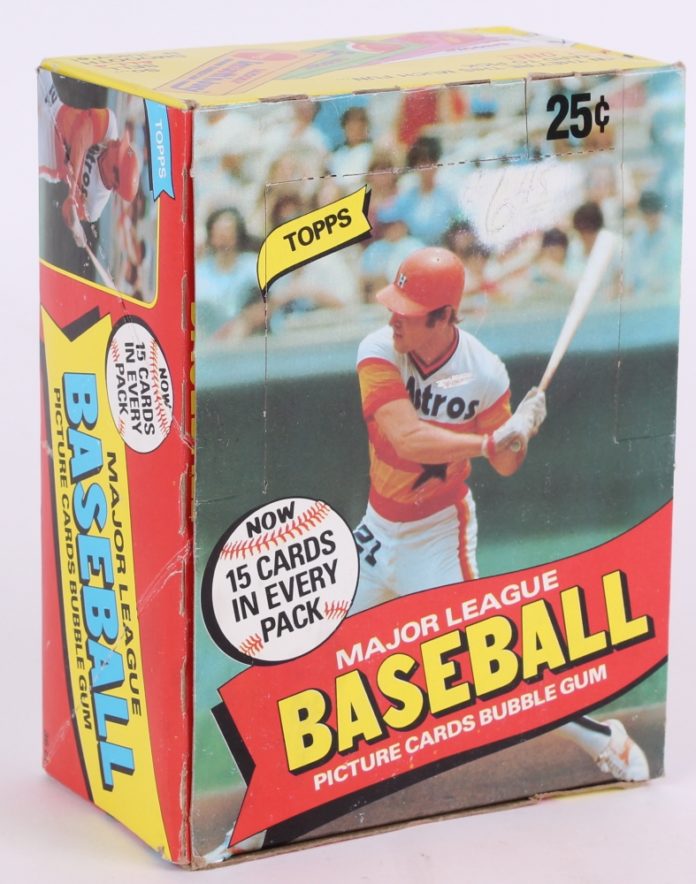 The 1980 Topps baseball cards set has a total of 726 cards and each card measures 2 1/2″ x 3 1/2″. The front of the baseball card shows a large full color photo of the player, usually in an action shot. The players name is at the top along with their position inside of a pennant like image. The team name is then at the bottom of the card in a larger pennant like graphic, larger than where the position is shown.

The back of the 1980 Topps baseball cards has the players position, name, and then team name at the top. The left side of the back contains a cartoon image with some text about the cartoon. In the middle there are the complete major and minor league batting record. Below that, some of the cards shows unique information about the player, normally one sentence, but some players have more. Then at the bottom is the basic player information.

What Are The Best 1980 Topps Baseball Cards?

The 1980 Topps Baseball Cards set includes the rookie card of the best base stealer in MLB history with Rickey Henderson, and then a lot of other hall of famers like Nolan Ryan, Reggie Jackson, Johnny Bench. And a lot of second year Hall of Famers like Ozzie Smith and Paul Molitor. Here is the list of the top 1980 Topps baseball cards.

This is the 1980 Topps Reggie Jackson baseball card. The front contains a nice full color image of Reggie swinging the bat during a MLB baseball game. His team is the New York Yankees and his position is outfield.

The 1980 Topps Johnny Bench shows him after he hit the ball and is ready to run to first base while wearing his Cincinnati Reds uniform and red batting helmet.

This is the 1980 Topps Paul Molitor baseball card and is the second year card of him. The front of the card shows Paul in his batting stance ready to hit a base hit for the Milwaukee Brewers.

The back of his baseball card shows a cartoon of a player looking at an award and it says above the cartoon “Paul was named Midwest league player of the year at Burlington, in 1977.”. Below his stats it shows three different things about Paul, they are: “Voted to Topps’ Major League Rookie All-Star Team in 1978, Had 4 game-winning RBI’s and led the Brrewers with 30 stolen bases during the 1978 campaign, and Finished strong in 1978 as he hit .400 over the course of his last 9 games of the season”.

This is the 1980 Topps Strikeout Leaders with Nolan Ryan and J.R. Richard. One of them, Nolan Ryan, is in the baseball hall of fame. The card shows full color head shot photo of each player.

The 1980 Topps Pete Rose shows a nice photo of Pete Rose wearing a Philadelphia Phillies batting helmet, probably waiting to to to bat.

The back of the card shows a cartoon of Pete standing on a base after getting a hit, and then it says “Pete set modern NL record with 44 game hitting streak for the Reds in 1978.”. The back also shows that Pete Rose had a .331 batting average, had 208 hits, and scored 90 Runs. He also lead the league in OBP (On Base Percentage) in 1979.

This is the 1980 Topps Eddie Murray baseball card and it shows him in an in action shot walking up to the plate to bat. He is wearing his Baltimore Orioles uniform and batting helmet.

The back of the card shows a cartoon of a mom looking at a photo of her kids and then it says “Eddie is one of 5 brothers to have played pro ball.”. Below the statistics it also says “Named Appalachian League Player of the Year at Bluefield during 1973”, and it also says “Voted as American League’s Rookie of the Year for the 1977 campaign.”.

The 1980 Topps George Brett shows an image of George watching a baseball game, either ready to go bat, or ready to go to third base and play the field. George Brett is wearing his Kansas City Royals uniform, which is the only team he played for in his career. It also shows at the top of the card that he was an A.L. All-Star.

The back of the card shows a cartoon of a mom looking at a picture of her kids and then it says “George is one of 4 baseball playing brothers.”. Underneath his statistics it shows “Was selected as Royals Player of Month for June of 1978 when he went 40-for-125 for .320 avg.”. It also says below that “Hit 3 Homers in Game 3 of 1978 A.L. Championships vs. Yankees.”.

This is the 1980 Topps Nolan Ryan baseball card showing a nice full color in action shot of “The Ryan Express” pitching for the Los Angeles Angels in the American League. At the top it also shows that he was an A.L. All-Star.

The back of the card shows a cartoon of a pitchers pitching a baseball with smoke following the baseball. Above the cartoon it says “Nolan has led American League in strikeouts 7 times during his career.”. Below his statistics it says “Has been clocked at 100.9 MPH.”. The back also shows that Nolan Ryan finished his 1979 campaign with a 3.59 ERA, Won 16 games, and had 223 strikeouts.

The 1980 Topps Ozzie Smith baseball card shows a nice in actions shot of Ozzie batting during a game. Ozzie is wearing his San Diego Padres uniform and batting helmet.

The back of the card shows a cartoon of a player running the base paths with smoke coming out the back of his feet and it says “Ozzie led Northwest League with 30 stolen bases at Walla Walla in 1977.”. Underneath his statistics it says “Was runner-up in balloting for NL Rookie of the Year in 1978.”. It then says “Had string of 12 consecutive successful Stolen Base attempts, 1978.”. It also says “His first major league Homer came at Atlanta Stadium, Sept. 4, 1978.”. Finally it says “Led National League with 28 sacrifice hits during 1978 campaign.”.

This is the 1980 Topps Rickey Henderson Rookie baseball card. It is a great card to collect because Rickey Henderson is the all-time stolen base leader for MLB. The card shows a nice in action photo of him in his batting stance ready to hit the ball wearing his Oakland A’s uniform and batting helmet.

The back of the card shows a cartoon of a thief wearing a bandit over his face and stealing baseball bases, then it says “Rickey had 7 stolen bases in one game at Modesto, May 26, 1977”. Underneath his statistics it says “His sacrifice fly capped a 3-run, 8th inning rally as A’s came from behind to defat Orioles, 7-10-79.”. Below that is says “His 4th inning Single accounted for A’s lone safety of contest in 2-0 loss to Yankees, July 8, 1979.”.

This is definitely one of the top sets of the 80’s simply because it contains the great Rickey Henderson rookie card. Because at this time Topps is the only set available, this is Rickey Henderson’s only rookie card. Other than that there are some nice Hall of Famers early in their career like Ozzie Smith, Paul Molitor, and Eddie Murray.