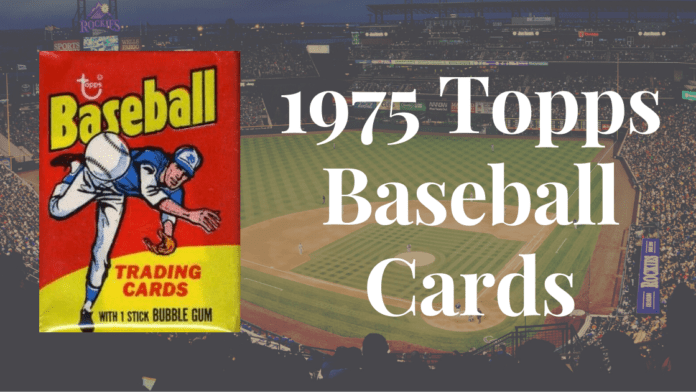 The 1975 Topps baseball cards are very unique and probably the most collectable set of the 70’s. The set contains some great rookies of Hall of Famers like George Brett, Robin Yount, Gary Carter, and Jim Rice. And also contains some great hall of famers like Nolan Ryan, Reggie Jackson, and Pete Rose.

What makes the 1975 Topps baseball cards set stand out is the bold two color border. Then there is a photo of the player, team name at the top, player name and position at the bottom, and in the center there is a facsimile autograph of the player. The back of the card features major and minor league batting record, player info like height, weight, etc., and a cool looking cartoon with a trivia question.

What Is The Best 1975 Topps Baseball Card?

With the many Hall of Famers and rookies there are a lot of cards that are highly desirable by collectors. Below are the top 1975 Topps baseball cards according to collectors throughout the United States.

This is the 1975 Topps George Brett baseball card. It shows a photo of him holding the bat in a stance posing for the camera and wearing his Kansas City Royals uniform. The back of the card states: “One of A.L.’s fine rookies of 1974, George was named A.A.’s All-Star 3rd baseman for 1973. He lead California League with 8 Sacrifice Hits in 1972.

George Brett is consider by most as the greatest Kansas City Royals player of all-time. In 1980 he led the league with an average of .390, the highest single season batting average since Ted Williams hit .406 four decades prior. George Brett is the first major league player to get 3000 hits, 300 home runs, 600 doubles, 100 triples, 1500 RBIs and 200 stolen bases.

The 1975 Robin Yount baseball card shows “Rockin Robin” crouched down ready to field a ground ball at shortstop wearing his Milwaukee Brewers uniform and hat with just the “M”. The back of the card says this: “Robin enjoyed a phenomenal rookie campaign for the Brewers in 1974. As an 18-year-older, he impressed on lookers iwth his poise and finesse with the bat and in the field. Rboin was Brewers’ first draft selection in June, 1973. He’s popular with fans.”

Del Crandall was the manager of the Milwaukee Brewers in 1974 and was the one that pushed for Robin Yount to play, and start, in the majors. Del saw him fielding ground balls and was so impressed that he then hit some more ground ball to Robin and his great hands, range, strong throwing arm made it an easy choice for Del to want him in the lineup. Because of that Robin Yount was the youngest player in 1974 and 1975.

This is the 1975 Gary Carter rookie baseball card. In 1975 Topps released a subset that included rookies, and Gary Carter was on one of those cards along with Marc Hill, Danny Meyer, and Leon Roberts. The small photo of Gary shows him wearing his chest protector and wearing a Montreal Expos hard hat. The card is titled “1975 Rookie Catchers-Outfielders”. The back of the card just shows the basic info about each player including height, weight, bats, throws, born date, born city and state, and home city and state.

Even though it took Gary Carter six tries to get into the Baseball Hall of Fame, he is still considered one of the best 10 catchers to play in the MLB. In fact if you look at WAR (Wins Above Replacement) he is fourth all-time between Ivan Rodriguez and Yogi Berra. But WAR is a speculative stat but normally a good indicator how good a baseball player was. Gary Carter was a ten time all-star, runner up to MVP in 1980, and lead the league in RBI’s with 106 in 1984.

This is the 1975 Topps Nolan Ryan baseball card that shows him standing at the mound wearing a California Angels uniform. This Nolan Ryan’s third year with the Angels, and his third year of greatness. The back of the baseball card states: “Nolan set mark by topping 300K’s 3rd straight year, 1974. Hurled 3rd no-hitter of career, vs. Twins, 9-28-74”.

Nolan Ryan ended his career with a winning percentage of just .526 because in all those years, he only appeared in the post season five times. That means that most of his teams were mediocre at best. If he played for winning teams just think about how many more wins he would have had. But he was part of one World Series win early in his career with the New York Mets, which was the “Miracle Season” for the 1969 Mets.

The 1975 Topps Jim Rice is his rookie card and also contains the rookies of Dave Augustine, Pepe Mangual, and John Scott. The photo of Jim Rice shows him wearing a Boston Red Sox cap and just love the collar out of his shirt. The back of the card shows Jim’s full name as “James Edward Rice” and contains all the basic information about the players.

Jim Rice is the only player in MLB history to lead the league in home runs, RBI’s, and triples the same year, which he accomplished in 1978. In 1978 Jim Rice also won the Most Valuable Player award. He was also voted to the all-star game eight times. Jim Rice is in the baseball Hall of Fame, but it took him 15 years to get in. But he did get in and was a great player.

This is the 1975 Topps Hank Aaron baseball card. It shows a headshot of the Hall of Famer playing for the Milwaukee Brewers. The back of the card does not have too much because it shows the major league batting record for Hank Aaron’s entire career. There are a lot of home runs and RBI’s on the back.

Hank Aaron played in more all-star games than any other player in history with 21. That’s one more than Stan Musial and Willie Mays. This record will probably never be broken. From 1959 – 1962 there were two all-star games played to help raise money for the players pension.

The 1975 Topps Joe Morgan baseball card shows him taking a practice swing on the sidelines. The card also has a star and shows “NL ALL STAR 2nd Base”. The back of the card states: “Joe had 58 Stolen Bases in ’74”.

Joe Morgan in in the baseball Hall of Fame and was selected in his first year of eligibility. He was chosen to 10 all-star games and won 2 Most Valuable Player awards. Joe was also a good defensive second baseman shown by him winning five straight gold glove awards from 1973 – 1977. Joe Morgan also won two World Series with the Cincinnati Red in 1975 and 1976.

The 1975 Johnny Bench baseball card shows him crouching down like a catcher and he has a smile. The card also shows that he is a NL All-Star catcher. The back of the card states: “The major leagues’ leading R.B.I. producer in 1974, Johnny ranked 2nd to Mike Schmidt in Homers last year.”.

ESPN has called Johnny Bench the greatest catcher in baseball history. Which is pretty accurate seeing that he is a 14 time all-star and two time National League Most Valuable Player. Johnny Bench also won two consecutive World Series championships in 1975 and 1976 with the Cincinnati Reds als known as the “Big Red Machine”. Bench is a member of the baseball Hall of Fame and was selected in his first year of eligibility with 96% of the ballets, which was the third highest percentage at that time.

This is the 1975 Topps Tom Seaver baseball card. It shows Tom standing by a net wearing his New York Mets uniform. The back of the card shows that Tom has one of his down years at which he went 11 – 11 with a 3.20 ERA. Even though he still had 200 strikeouts for the 7th straight year.

Tom Seaver is a Hall of Fame pitcher that played for the New York Mets, Cincinnati Red, Chicago White Sox and Boston Red Sox. He won 311 games in his career. There are only 24 pitchers in the MLB with 300 or more wins. Tom won the World Series with the New York Mets in 1969 along side Nolan Ryan. He also won the Cy Young award three times with the Mets in 1969, 1973 and 1975.

The 1975 Topps Pete Rose shows Pete in a photo holding the bat ready to swing. There is also a white star that shows he was a NL All-Star in the outfield. The back of the card says “Pete led both leagues in Doubles, ’74.”.

Versatile Pete Rose is the only player in Major League history to play in more than 500 games at five different positions: right field, left field, third base, second base, and first base. Pete had a lot of accomplishments in his career. He was a 17 time all-star, 3 time World Series Champion, 2 time gold glove winner, NL MVP in 1973, and many more. The big question is, will Pete Rose ever be allowed into the baseball Hall of Fame?

The 1975 Topps baseball cards consists of some great hall of fame players and some key rookie cards like George Brett, Robin Yount, and Gary Carter. This set also does not include any high number or short prints, therefore all the stars and rookies have the same quantities available. This set is definitely a defining moment for a new look baseball card brought out by the great Topps company.