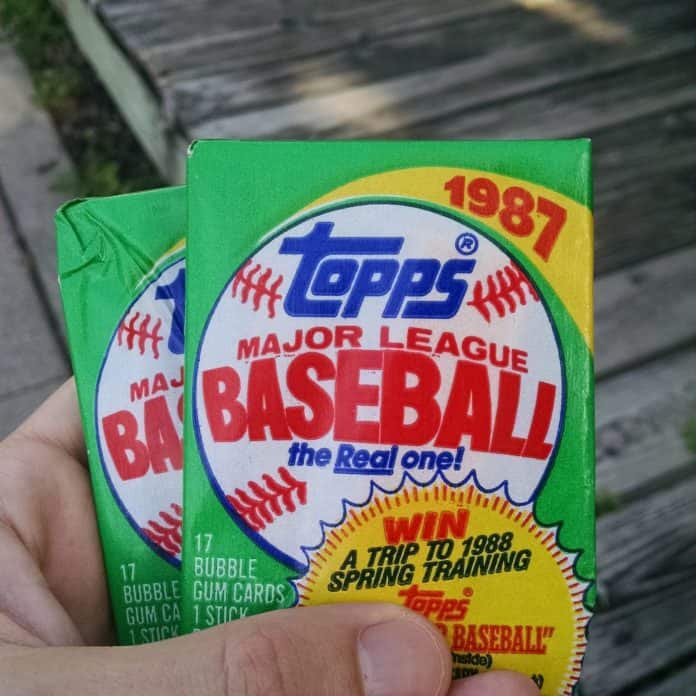 The 1987 Topps Baseball Cards are known and easily recognized by the faux wood border around the cards. There are a lot of collectors that will tell you this is their favorite set of the 80’s. Topps made sure there was no shortages and it is still pretty easy to buy packs for this 30 years later at a pretty reasonable price.

There were 792 cards in the set with each card measuring the now standard of 2 1/2″ x 3 1/2″. Inside the faux wood border is a photo image of the player, some in action and some not. The upper left of the card holds the team logo for the player and at the bottom center is a box with a team color that has the players name inside. And then at the bottom right is the Topps logo. Some of the subsets for the 1987 Topps Baseball cards include Team Leaders, All-Stars, and Turn Back the Clock.

What Is The Best 1987 Topps Baseball Card?

There are some pretty good rookies included in this set, and then there are the stars like Nolan Ryan, Mark McGwire, and Roger Clemens. But the one or two cards that highlight this set is either Barry Bond or Bo Jackson.

The 1987 Topps Barry Bonds is his rookie card. Not his first card because there are a few in 1986 that are considered his first card, but not his rookie card. This card shows a nice photo of Barry Bonds at the end of a swing, most likely a home run, with the Pittsburgh Pirates. Barry Bonds is considered by many as the greatest baseball player to ever play. His stats definitely prove that argument, but steroid use has kept him out of the Hall of Fame. Barry was considered a complete player because he excelled at both offence and defense. He won 8 gold gloves and won the NL MVP a record 7 times. Bonds also hold the single season home run record and career home run record. But the argument is that how many home runs would he have if he didn’t use steroids?

This is the 1987 Topps Bo Jackson rookie baseball card. Bo Jackson played in both the NFL and MLB at the same time and was a star at both. In fact the only all-star game he played in (1989), he was also the MVP of the game. That same year, 1989, Bo Jackson finished 10th in the MVP race. He finished his career with 4 20 home run seasons and 2 20 stolen base seasons.

This card features Bo Jackson playing the field looking like he is about to run for a fly ball. The card is part of a subset called Future Stars, which is printed on the card above his name. The back of his card states that he also won the 1985 Heisman Trophy, which is the best collegiate football player of that year.

The 1987 Topps Mark McGwire would be his rookie card, but Topps issued a subset in 1985 that contained Olympic players, and Mark was one of those cards. The photo on the card shows Mark wearing his green Oakland A’s uniform while batting. The logo at the top and the box that contains his name is also the same green as his uniform and matches nicely.

Mark McGwire is one of those players that, based on stats alone, should be in the Hall of Fame. But because of steroid use, a lot of the voters for the Hall of Fame won’t vote for him. Some notable stats is that he hit more than 500 home runs in his 16 year career.

This is the 1987 Topps Barry Larkin rookie card. Barry played his entire career with the Cincinnati Reds and won a World Series with them in 1990. Some consider Barry Larkin one of the top players of his era. He was selected an all-star 12 times, won 9 silver slugger awards, three gold glove awards and one National League MVP award in 1995.

The 1987 Topps card shows Barry Larkin swinging his bat with a donut, waiting to get up to the plate and get a nice hit. He is wearing his Cincinnati Reds uniform that matches the card’s logo and box at the bottom. The back of the card also states that Barry was MVP of American Association in 1986.

This is the 1987 Topps Rafael Palmeiro rookie baseball card. It contains an image of Rafael after he swung the bat. He is wearing his Chicago Cubs uniform. This card is also part of the Future Stars subset. The back of the card states that Rafael hit .415 with 29 HR and 94 BRI at Mississippi State in 1984 and was the first triple crown winner in the conference.

Rafael Palmiero, like a lot of other stars from the 80’s, have the statistics to be in the hall of fame. But because of his steroid involvement, he is not in the hall. In fact, days after recording his 3,000th hit, Rafael was suspended for 10 games because of anabolic steroid use. He is also one of only six players in MLB history to get 3,000 hit and 500 home runs.

The 1987 Topps Roger Clemens shows a nice photo of young Roger wearing his Boston Red Sox jersey and hat. The back of the card shows his previous season, where he won 24 games and lead the league with a 2.48 ERA. It also states that in Roger’s two year stint at the University of Texas he had a record of 25 – 7 with 241 strikeouts in 275 innings pitched.

Here is the 1987 Topps Will Clark rookie baseball card. It has a photo of “Will The Thrill” playing first base wearing his San Francisco Giants uniform. The logo at the top left and his name at the bottom match his uniform perfectly. The back of the card states that Will Clark made the 1984 U.S. Olympic team and was a 2-time NCAA All-American at Mississippi State.

This is the 1987 Topps Nolan Ryan baseball card. The card shows Nolan Ryan pitching from the mound wearing a Houston Astros uniform. Nolan Ryan started out with the New York Mets but his dominant career really started when he joined the California Angels in 1971. In his first season with the Angels, Nolan Ryan won 19 games while striking out 329 batters. The very next season he set the modern era record for most strikeouts in a season with 383 and threw his first no-hitter of his career. Nolan Ryan was selected to the Baseball Hall of Fame in 1999.

The 1987 Topps Cal Ripken baseball card shows him posing with a bi color bat wearing his Baltimore Orioles uniform. The back of the card states that Cal’s brother, Billy, plays in the Orioles’ chain. In 1982 Cal Ripken started his streak of the most consecutive games played without taking a day off. He did that for 2,632 games which earned him the nickname “Iron Man”. Cal Ripken redefined the shortstop position in baseball, because before him, offence was a second thought. When Cal ended his career, he was a two time Most Valuable Player and an all-star 19 times.

This is the 1987 Topps Ruben Sierra rookie baseball card. The photo shows Ruben Sierra swinging a bat during a game wearing his Texas Rangers uniform. The back of the card states that Ruben played basketball and football in high school.

This is a very collectable set because the cards look really nice. It’s just too bad that Topps released so many cards during this time, which lowers the price of all the cards. This set does contain some nice rookies that can be seen above, like: Bo Jackson, Barry Bonds, Will Clark, Rafael Palmeiro, and Barry Larkin. People looking to collected some cool rookies and hall of famers can get these cards for cheap.