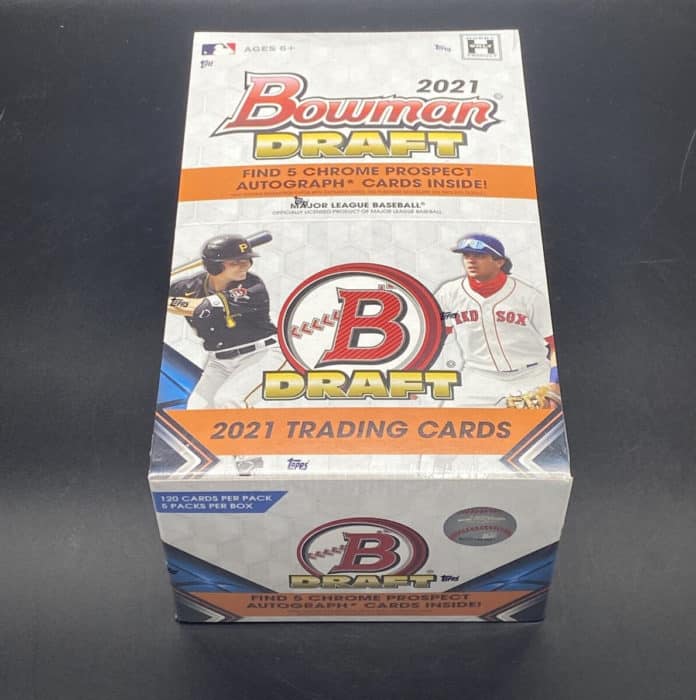 The 2021 Bowman Chrome Draft is the final installment of the main Topps MLB prospects for the season. The baseball card hobby box focuses on the top and exceptional draft picks for the season in Major League Baseball.

What Is the Best 2021 Bowman Chrome Draft Baseball Card?

Here are some of the top and exceptional draft baseball players. All of these players are on the raising bar with phenomenal records. From Jordan Lawler to Julio Rodriguez, Harry Ford, Sal Frelick, Marcelo Mayer, and others are part of the list.

Playing for Boston Red Sox, Marcelo Mayer is a professional Shortstop in his team. He got selected by Red Sox in the first round of the 2021 Major League Baseball draft, for a signing bonus of $6.66 million. With 3 home runs and 17 RBIs, Marcelo Mayer is a rising star in Sox.

2021 Bowman Chrome Draft card has Marcelo Mayer in action, after hitting a powerful shot. At the bottom right side is the official logo of the Boston Red Sox. The backside of the card has his High School batting record with other interesting facts and skills.

The card of Jordan Lawlar shows him in action, ready to face the fierce ball with his bat high in the air. The right bottom side of the card has the official logo of Arizona Diamondbacks, with his name and position in team written perfectly. The backside has his batting records with skills.

Jordan Jeffery – Joseph Lawlar is a Shortstop for Arizona Diamondbacks. He was selected by Diamondbacks in the first round of the 2021 MLB draft. His signing bonus was $6.7 million when acquired. In 2021, Lawlar suffered from a left shoulder injury after playing only two games.

In his 2021 Bowman Chrome Draft card, he is seen ready to take the shot while wearing a red jersey. At the bottom right side is the official logo of the Washington Nationals, and his name and Shortstop position in the team. The backside features his impressive batting record from college.

The card shows Coltan Cowser in action, hitting the ball with his bat using all his strength. At the right bottom side is the official logo Baltimore Orioles along with his name and position in the team. The backside has his college baseball batting record, featuring his skills.

Being an Outfielder for Baltimore Orioles, Colton Dale Cowser is an exceptional baseball player. He signed a bonus of $4.9 million when Baltimore Orioles acquired him in the 2021 Major League Baseball Draft. In 25 games, Cowser made a single home run and 26 RBIs.

Julio Yamel Rodríguez is a Dominican professional Outfeilder, playing for Seattle Mariners. At the age of 16, Rodriguez was signed by Mariners for $1.75 million as an international free agent. Today, he ranks at position 1 for being an exceptional prospect by MLB itself.

The 2021 Bowman Chrome Draft has Julio Rodriguez ready to fearlessly face the ball. At the bottom right side of the card is the official logo of the Seattle Mariners, with his name and position in the team. The backside has his minor league batting record with his skills mentioned.

The card shows Harry Ford in position, ready to hit the ball. The right bottom side has the official logo of the Seattle Mariners, along with his name and position mentioned. The backside has his previous record with skills and up close information.

Harrison Michael Ford is an American baseball Catcher, who is playing for Seattle Mariners. He was drafted by the Mariners in the first round of 2021 MLB Drafts, for a signing bonus of $4.36 million. With 3 home runs, 57 RBIs, 20 doubles, and 7 triples, Harry Ford remains on the top.

Nicknamed “The Martian”, Jasson Domínguez is a Dominican professional Outfielder in New York Yankees. He joined the franchise for a bonus of $5.1 million in 2019. In 2021 he had six strikeouts and six walks in the Florida Complex League.

The outfielder in the card is shown running with his helmet on his head. The right bottom side features the original logo of the New York Yankees, with his name and position mentioned together. The backside has Jasson Dominguez’s batting record with his skills discussed in detail.

The card has Henry Davis running in the field. The official logo of Pittsburg Pirates is at the bottom right side with his name and position mentioned along with it. The backside features Davis records.

An Outfielder for Milwaukee Brewers, Salvatore Michael Frelick has signed for $4 million through 2021 Major League Baseball Drafts. He ended 2021 with 31 hits and 1 home run.

His draft card shows him running in the field with gloves. The official logo of the Milwaukee Brewers is on the right bottom side. The backside features his previous records and skills.

Featuring Kansas City Royals official logo at the right bottom side, Bobby Witt Jr. is seen running in the field. The backside of the card has his records and skills.

These are some phenomenal and great MLB prospects who were drafted by leading Major League Baseball teams. We hope to see them rising and becoming the stars of tomorrow, following the legacy of veterans.