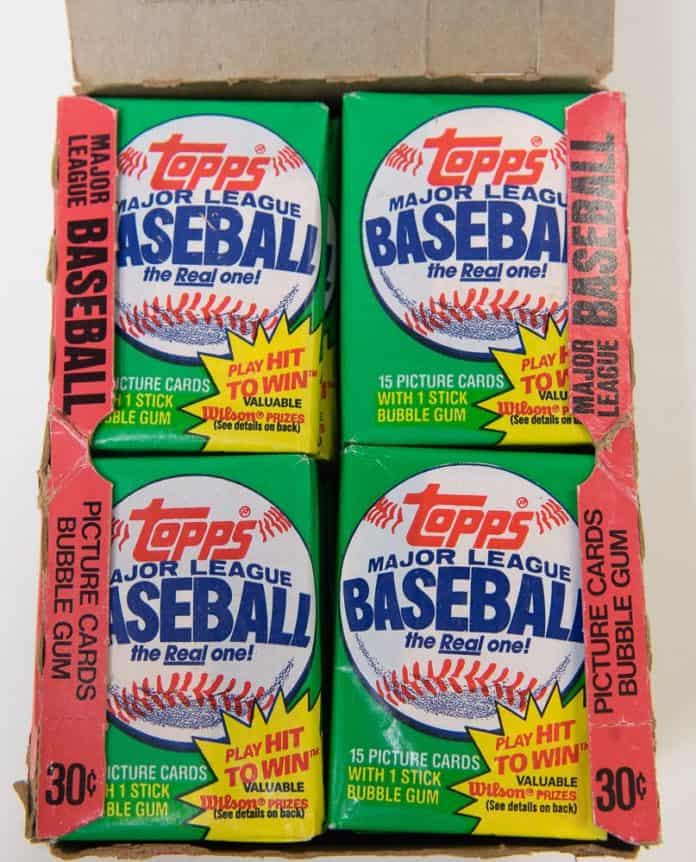 The back of the 1981 Topps baseball cards are a cardboard color and then red over that with the player stats, and then a darker red that shows the player name and position. The number of the card is at the top and inside of a baseball. Below the stats the card has a little writeup about the player and below that there is a cartoon with something else about the player.

What Are The Best 1981 Topps Baseball Cards?

This is the 1981 Topps Harold Baines rookie baseball card. It shows Harold standing and holding his bat in his batting stance and wearing his Chicago White Sox uniform and hat.

The back of the card says “Hit 2 Homers in one inning at Iowa, August 4, 1979. It then says “Was first noticed by White Sox as a 12 yr. old playing little lg. ball.” and shows a cartoon of a player in the field catching a baseball. To the right of that is another cartoon that shows a hitter batting and says “Batted .532 as an outfielder – 1st basemen during senior year of high school”. Harold Baines finished 1980 with 13 home runs, 409 RBI’s and a .255 batting average.

The 1981 Topps Tim Raines rookie baseball card shows him along with two other players. But the main player is obviously hall of famer Tim Raines. At the bottom of the card it says “Expos Future Stars”.

The back of the card shows that Tim Raines started out playing 2nd base. 1981 is the first year that Time Raines made the all-star team but in 1980, he only played a little. He ended up with a .050 batting average, which boils down to 1 hit in 20 at bats. The plus is that he was able to get 5 stolen bases.

This is the 1981 Topps George Brett baseball card and shows a close up photo of George Brett with a smile on his face and wearing his Kansas City Royals uniform. At the top of the card is shows that George Brett was an A.L. All-Star in 1980.

The back of the card shows two cartoons at the bottom. The one on the left shows four baseball players and says “He’s the youngest of four baseball playing brothers.”. The cartoon on the bottom right shows a player crossing off averages and says “Flirted with magic .400 mark for much of 1980 season.”. The back shows that George Brett finished his all star campaign in 1980 with a .390 batting average, 24 home runs, and 118 RBI’s for the strike shortened season.

The 1981 Topps Pete Rose shows him in a close up photo holding on to his bat and wearing his Philadelphia Phillies uniform underneath a Mizuno jacket and his Phillies batting helmet.

This is the 1981 Topps Ozzie Smith baseball card that shows an in action full color photo of Ozzie wearing his San Diego Padres uniform.

The back of the card says “Ozzie led Padres with 28 stolen bases in 1979. The cartoon at the bottom left shows a person wearing his graduation hat and batting and then it says “Had fine collegiate career at Cal Poly, San Luis Obispo, California.”. The cartoon on the bottom right shows a baseball player reading the newspaper and then it says “Was runner-up for N.L. Rookie of the Year Honors in 1978.”.

This is the 1981 Topps Hubie Brooks and Mookie Wilson rookie baseball card. It has closup photos of both of them along with Juan Berenguer and it says at the bottom of the card “Mets Future Stars”. Both are good players and Hubie Brooks was in two all-star games.

The back of the card has each players name followed by player information. There is also three Topps logos in each players box.

The 1981 Topps Rickey Henderson shows a full color photo of Rickey wearing his warm up uniform for the Oakland A’s.

The back of the card shows a cartoon at the bottom left of a person wearing a football helmet and then it says “Received a reported 2 dozen college football scholarship offers.”. The cartoon on the right side shows a baseball player stealing bases and then it says “Stole 7 bases in one game at Fresno May 26, 1977.”.

This is the 1981 Topps Nolan Ryan baseball card showing a close up photo of Nolan wearing his Houston Astros uniform and cap.

The back of his card does not have any cartoons because all the space is needed to show his career stats. It shows that in 1980 Nolan Ryan had a 3.18 ERA, 11 Wins, and 200 strikeouts. He did not make the all-star team that year.

The 1981 Topps Fernando Valenzuela rookie card also has Mike Scioscia and Jack Perconte on the card and it says at the bottom “Dodgers Future Stars”. All three players photos are close ups of their head and they are all wearing their Los Angeles Dodgers uniform and cap.

The back of the card has the standard basic player information for each player. In 1981 Fernando Valenzuela ended up winning the Rookie of the Year and the Cy Young award. He also finished 5th in MVP.

This is the 1981 Topps Kirk Gibson rookie baseball card. He is wearing his Detroit Tigers uniform, warmup jacket, and cap.

The 1981 Topps Baseball cards are a great set to own and contains a lot of hall of famers and even a rookie card of a hall of famer in Harold Baines. This set would be considered a great cheaper Topps set from the 80’s that has plenty of star power.