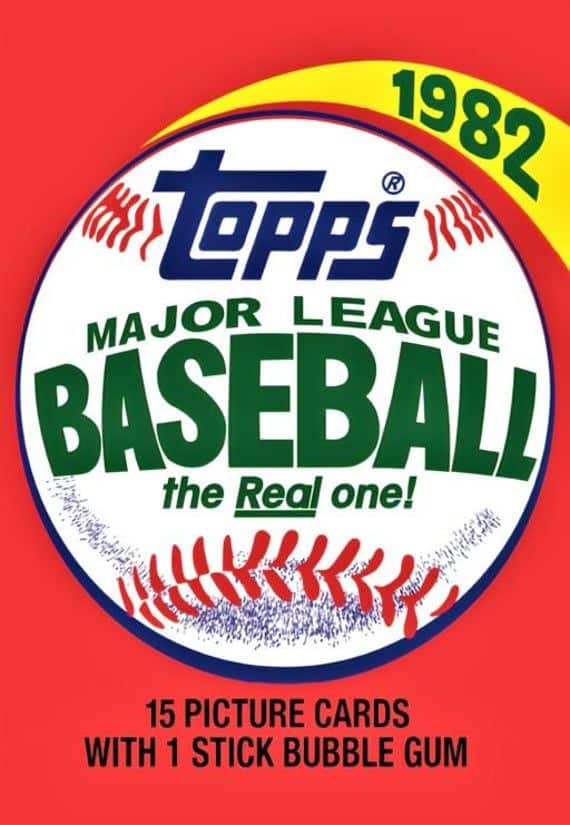 The back of the cards are a bold green with some shades of lighter green and then the text in a dark blue color. Some of the cards contain a cartoon at the top along with a tidbit about a player in the Major Leagues. Also on the back is the complete major and minor league statistics and all the information unique to the player: height, weight, throws, bats, when they were signed, date born, and home.

What Are The Best 1982 Topps Baseball Cards

With a mix of mostly stars, there are a few rookies that made this list. Like most of the 80’s, players like Nolan Ryan, Mike Schmidt, Rickey Henderson, and Cal Ripken are on most of the best of lists. Let’s see who made the 1982 topps baseball cards.

This is the iconic rookie card of Cal Ripken and it is on a Future Stars card of the Baltimore Orioles. Cal Ripken broke the late and great Lou Gehrig’s record for consecutive games played, which was originally thought that it will never get broken. He was a 19 time all-star, is a member of the 3000 hit club, and is considered one of the greatest shortstops/third basemen to ever play the game.

The 1982 Topps Pascual Perez makes this list because of a unique error card, where Topps accidentally omitted his position on the card. Even though the error card is easier to get than the one that is corrected, the error is worth about twenty times more.

The 1982 Topps Nolan Ryan card shows him about to pitch to home plate, wearing the Houston Astros striped uniform. In fact, the colors on the card match his uniform almost perfectly. As you are probably well award, Nolan Ryan was known for his blazing 100 mph fastball that he was still throwing in his 40’s. He holds some major league records, but the one that is synonymous with his name is his record for most career strikeouts. Nolan Ryan is the only pitcher to strikeout more than 5000 hitters. Ryan was elected to the Baseball Hall of Fame in 1999, in his first year of eligibility, along with George Brett and Robin Yount.

The 1982 Topps Rickey Henderson baseball card shows him at first base ready to steal second base. Rickey Henderson was the premier base stealer during the 80’s and is the all time record holder for most stolen bases in a career. The back of the card even states that Rickey set the A.L. mark with 100 stolen bases in 1980. The “Man of Steal” also holds the Major League record for runs, unintentional walks, and leadoff home runs. He also holds the single season record for stolen bases when he got 130 in 1982. Rickey Henderson was the Most Valuable Player in 1990 and won World Series with the Oakland A’s and the Toronto Blue Jays.

The 1982 Topps Pete Rose baseball card shows him standing at first base for the Philadelphia Phillies ready to field a ground ball. Pete Rose played in the MLB from 1963 to 1986 and managed from 1984 to 1989. Also known as “Charlie Hustle”, Rose won the Major League Rookie of the Year Award, one Most Valuable Player award, three batting titles, and three World Series rings. He is also the all time career leader in hits with 4256, and that record will probably never be broken again.

This is the 1982 Topps Lee Smith baseball card. It has a headshot image on the card of him wearing his Chicago Cub’s uniform. Lee Smith was elected to the Baseball Hall of Fame in 2019. Lee Smith played eighteen years in the Major Leagues and had the most career saves from 1993 until 2006 when he was passed up by Trevor Hoffman. He was a seven time all-star, lead the league in saves four times and finished his career with a 3.03 ERA.

The 1982 Topps Mike Schmidt baseball card shows a photo of Mike’s head and shoulders wearing his Philadelphia Phillies uniform with a small smile. The back of his card states “The major leagues’ Home Run leader in 1981, Mike blasted a Roundtripper in the 1981 All-Star Game”. There is only one player in the history of baseball that has more Most Valuable Player awards than Mike Schmidt’s three. Aside from that he also lead the league in home runs eight times, won ten gold gloves, and was in twelve all star games. Not bad for someone that was picked 30th in the draft.

The 1982 Topps George Brett is a beautiful looking card with the blue text matching George Brett’s blue Kansas City Royals jersey. It shows a picture of Brett holding a bat after a baseball game. George Brett played third base for the Kansas City Royals his entire career. Over that Hall Of Fame career George Brett compiles 3,154 hits (second most of all third basemen). He is also one of only four baseball players in the MLB to hit more than 3000 hits, belt 300 or more home runs, and have a career batting average greater than .300. George Brett was also the only player to win a batting title in three different decades.

This is the 1982 Topps Highlight card of Nolan Ryan. It showcases his 5th career no-hitter. The picture shows Nolan wearing his orange and red colorful Houston Astros uniform while throwing a pitch at the mound during the game. It happened in Houston Texas on September 26th, 1981. Not only was it his 5th no hitter, but is also broke the record of baseball great Sandy Koufax who had 4. Later he would eventually get his 6th and final no-hitter.

These ten players showcase this excellent baseball card set from 1982 that consisted of 792 cards. At the time of it’s release, the 1982 Topps Baseball Cards was the most cards ever released by Topps for a set. Besides Cal Ripken and Lee Smith (shown above), some other rookies included in the set were Dave Stewart, Steve Sax, and Chili Davis, all of whom had some really good seasons.