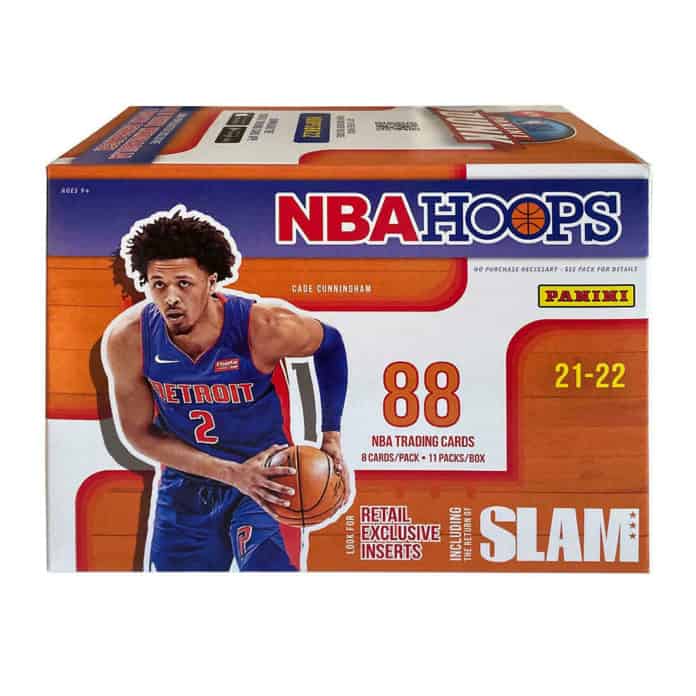 Meticulously crafted by Panini, one of the leading sports cards producers, the Hoops Basketball cards feature early rookie cards for the fans. The 2021 – 22 NBA Hoops Basketball is kicking off the 75th NBA Season with these phenomenal collectable cards. Even though the typical schedule of the National Basketball Association is delayed. But the Panini basketball cards are ready to start the season with a bang!

The NBA Hoops Basketball collectable cards of 2021 – 22 are all about early rookies of the sports. They are featured on the cards in pro uniforms i.e., NBA jerseys. The hoops collectable is a flagship style of Panini that has a comprehensive base set, along with many inserts.

However, there is a big change this time. Instead of two autographs inside the hobby box, there is a single signature card. Don’t forget, the 2021 – 22 NBA Hoops Basketball is an exclusive collection of rookies. Therefore, it is limited in number and a bit expensive.

There is a single autograph in the hobby box with 24 exceptional inserts. NBA fans can collect premium players through the great number of inserts.

The 2021 – 22 NBA hoops Basketball is led by a new and succeeding rookie class. This Panini collectable set is providing a golden opportunity to look into the league at an early stage. The cards showcase talented and brilliant NBA draftees from 2021, wearing original NBA jerseys.

The 75th Anniversary of the NBA is coming soon and the Hoops Basketball by Panini is paying a tribute to them through these collectables. There is a new parallel choice of NBA 75th Anniversary included for the first time.

Being an insert heavy series, the 2021 – 22 NBA Hoops Basketball is loaded with exceptional content. Fans can find hobby-only inserts in HIPnotized, Prime Twine, High Voltage, Jam-tastic, Highlights, and Legends of the Ball.

There is a single autograph in the pack. NBA fans can look for Rookie Ink, Hot Signatures, Hoops Ink, and Hot Signatures Rookie autographs in the hobby box. Don’t forget the Red Parallels are limited to the Hobby.

This time around, the Panini NBA Hoops Basketball features a bold design, attractive colors, and conventional super style. Each card holds great value with the most beloved rookie stars of the National Basketball Association.