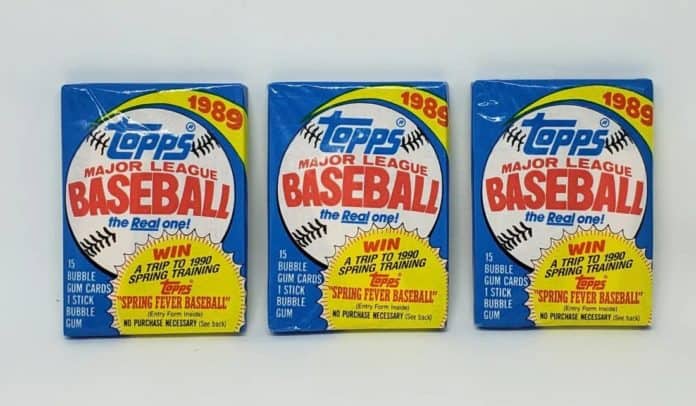 The 1989 Topps baseball cards sets consists of 792 cards and each card measures the standard 2 1/2″ x 3 1/2″. Each card has a white border that surrounds a picture of each player in an action shot or standard picture of them posing. Inside the border is a thin colored line and then the team name in cursive like fonts with the player name in a banner that extends from the team name.

The back of the card has the complete major and minor league and sometimes collegiate stats. Above the stats is the normal player information like height, weight, throws, bats, signed date, how acquired, born date, born city, and home. Below the stats is some unique player information unless they have a lot of stats because then there is not enough room.

What Are The Best 1989 Topps Baseball Cards?

There are a lot of starts and rookies in the 1989 Topps Baseball cards set along with a lot of error cards that are very collectable for this year. What is the best card? Nolan Ryan, John Smoltz, or Jim Abbott? Read below to find out.

This is the 1989 Topps Jim Abbott rookie card. It shows Jim wearing his Michigan Wolverines college uniform because he doesn’t have any major or minor league statistics at this time. The back of the card shows Jim Abbott’s stats from college where he finished his career with a 3.03 ERA with a 28 – 8 record.

The back of the card states that Jim was named Big-10 Player of the Year while earning selection to Big-10 All-Tournament Team and All-Conference First Team. It also states that Jim Abbott was a member of the 1988 USA Olympic Team and made two appearances in Seoul, Korea.

The 1989 Topps Gary Sheffield rookie card shows a nice picture of him wearing his Milwaukee Brewers uniform. The card is also a subset from the original set and says “Future Star” at the top.

This is the 1989 Topps Barry Bonds baseball card. It show a picture of Barry posing while holding a bat wearing his Pittsburg Pirates uniform.

The 1989 Bob Welch error baseball card shows the pitcher wearing his Oakland Athletics uniform, probably during a game. Up until this point Bob Welch has had a pretty nice career. IN 1988 for the A’s he won 17 games and finished the year with a 3.64 ERA. The bottom of the card says “His 1st Win in Championship Series: 10-4-78. His 1st Save in Championship Series: 10-19-81”.

This is considered an error card because there is this text missing “Complete Major & Minor League Batting Record”.

The back of the card says: “Led New York-Penn League in Stolen Bases at Little Falls in 1983. Set record with 10 consecutive Hits, August 7 – 10 including a 5-Hit performance, August 9th.”.

This is the most valuable error cards by Stan Jefferson as it shows a pink triangle in the lower left hand side of the front of the card.

The 1989 Topps Franklin Stubbs error card shows him wearing a batting helmet probably during a game, and wearing his Los Angeles Dodgers uniform.

The back of the card says “Franklin starred for US Baseball Squad that won two Gold Medals in International play during the 1981 season.”. Franklin Stubbs stats for 1988 was a .223 average with 8 home runs andj 34 RBI’s. Franklin was an average player that had a few nice seasons.

This is an error card because it shows “Dodgers” along with the banner below in white. The updated version had gray.

This is the 1989 Topps Craig Biggio Rookie baseball card showing him wearing his Houston Astros uniform and batting helmet.

The back of the card says “Craig was signed as a 1st round Draft selection of the Astros, June 8, 1987 by Scout Clary Anderson. In 1983 he was a leading high school football player.”. The year prior, 1988, Craig played his first season in the MLB and finished with a .211 batting average, 3 HR’s, and 5 RBI’s in 123 AB’s. But he will eventually make it into the Baseball Hall of Fame.

The 1989 Topps John Smoltz rookie baseball card has a photo of his chest and above wearing his Atlanta Braves uniform and cap.

The back of the card says “John was signed as an undrafted Free Agent of the Tigers, 9-22-85, by Bill Schudlich and Ken Madeja.”. The back also shows John’s first year in the Major Leagues in 1988. He finished the year with a sub par 5.48 ERA, 2 – 7 Record. But he would eventually make his way into the Baseball Hall of Fame.

This is the 1989 Topps Nolan Ryan baseball card that shows a photo of him pitching in a game wearing his Houston Astros uniform.

Nolan Ryan had a decent year in 1988 while playing on another sub par team. If Nolan would have played on good teams throughout his career he would probably have 400 wins. In 1988 he finished with only 12 Wins while striking out the National Leagues best 228 hitters and had an ERA of 3.52.

The back of the card shows Randy Johnson’s first year in the Major Leagues and he finished 1988 with a 2.42 ERA and 25 strikeouts while pitching in 26 innings. The back also says “Randy was signed as a 2nd round draft selection of Expos, June 9, 1985 by Cliff Ditto & Bob Fontaine, Jr.” Randy Johnson would finish his career as one of the most dominating pitchers to play the game.