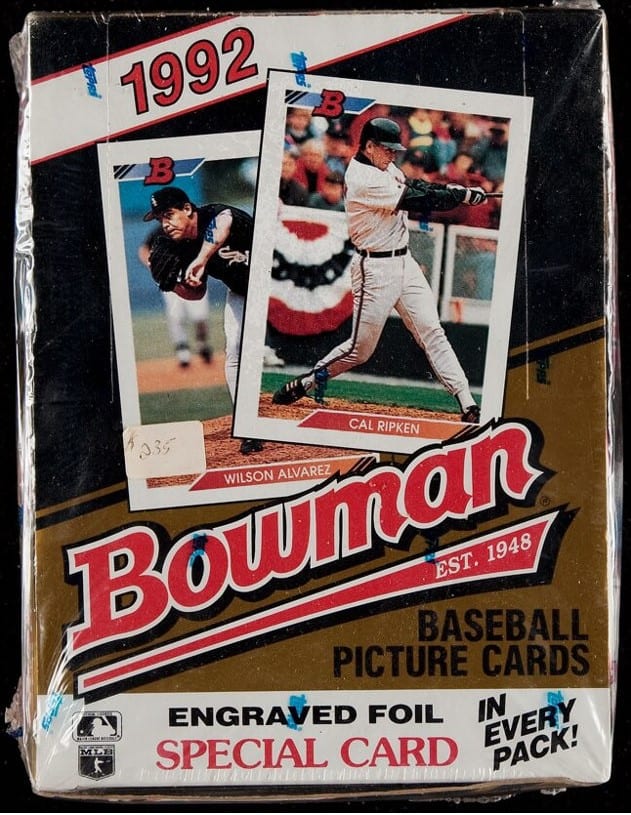 The 1992 Bowman baseball cards set consists of 705 cards and they each measure 2 1/2″ x 3 1/2″. The cards contain a photo of each player either in an action shot or posing with nice clothes on. The Bowman logo is bold and in the upper left hand side of the card and the player name at the exact opposite side, the lower right. The 1992 Bowman baseball cards also contain a white border around the picture, logo, and player name.

The back of the baseball card shows a head shot image of the player along with the basic player info like height, weight, bats, throws, drafted, and born date and born city. The card also shows the stats for the prior year broken down by each team, and then the totals at the bottom for the year. And underneath that the career stats for that player.

What Are The Best 1992 Bowman Baseball Cards?

This is the 1992 Bowman Garret Anderson Rookie card. The card shows him wearing some nice pants and an air jordan polo shirt. The back of the card had a head shot of Garret smiling and then it shows his minor league stats and career totals because he has yet to play in the majors. The back also says “Garret made his Professional Baseball debut at Boise in 1990. He played at Quad City in 1991.”

Garret Anderson played some great baseball for the the California/Anaheim Angels and then with the Los Angeles Dodgers. He lead the league in doubles twice in his career and was a 3 time all-star. He finished his career with a .293 batting average, 2,529 hits, 287 home runs, and 1365 RBI’s. Garret helped the Angels win the 2002 World Series, and was the Most Valuable Player of the 2003 All-Star game.

Carlos Delgado lead the league in RBI’s in 2003 along with OPS of 1.019. He was in two all-star games and was runner up for MVP in 2003. Carlos is the all-time home run leader among Puerto Rican players with 473. Another cool stat is that he is one of 4 players in baseball history to hit 30 or more home runs in ten consecutive years.

This is the 1992 Bowman Jim Thome baseball card. The picture shows him in the field at third base ready to make a play wearing his Cleveland Indians uniform. The back of the card shows a head shot picture along with the basic information like htat he was drafted by the Indians with pick #13 in the June 1989 Draft.

Jim Thome was known for hitting home runs. Even though he only lead the league once, he still hit 40 or more 6 times and had a career high of 52 home runs in 2002. He was a 5 time all-star and finished his career with a .276 batting average, a whopping 612 home runs (at this time 8th all time), and 1699 RBI’s. Also because he walked often, his career on base percentage of .402 ranks 19th all time. Jim Thome was elected to the Baseball Hall of Fame in 2018, his first year of eligibility.

The 1992 Bowman Manny Ramirez rookie card shows him wearing a nice green and white striped shirt leaning over a stone wall near a Church. The back of the card has a nice head picture of Manny smiling and shows his statistics for the prior year in the minor leagues. The back also shows that he was Drafted by the Cleveland Indians with the #1 pick in the June 1991 draft.

Manny Ramirez is probably the best right handed hitter of his generation. He is a 12 time all-star and lead the American League in home runs once and RBI’s once. Manny also hold the record for most home runs in post season play. He was known as a great player that could hit for average and get a lot of home runs. Manny Ramirez finished his career in 2011 with a .312 batting average, 555 home runs, and 1831 RBI’s. While he is not yet in the hall of fame because of this steroid use, he most likely will eventually get in.

This is the 1992 Bowman FOIL baseball card of Manny Ramirez. It shows Manny wearing the same shirt in his regular issue card, but he is standing up with a smile. The back of the card has a foil stamp that says “National Association Professional Baseball Leagues”. And Manny had a card because he was the 1991 Appalachian League Player of the Year. It shows that “At Burlington in 1991 Manny batted .326 with 44 Runs, 11 Double, 4 Triples, 19 HR and 63 RBI.”. In the set there are 45 foil-stamped cards that were inserted one per wax pack, two per jumbo, and fiver per carton.

This is the 1992 Bowman Chipper Jones and it shows him wearing a nice long sleeve striped shirt and blue kaki shorts and sporting a hat that says “Braves”. The back of the card states: “Chipper made his Professional Baseball debut with the Gulf Coast Braves in 1990. He playead at Macon in 1991.” Therefore, even though this is not his rookie card, he did not play for the Atlanta Braves the previous year in 1991.

Chipper Jones is one of the best Atlanta Braves to play over the past 20 years. He was Most Valuable Player in the National League in 1999 and tlead the league in batting average in 2008 with a .364 average. Over his career, Chipper Jones batted .303, hit 468 home runs, and 1623 RBI’s. He won a World Series in 1995 with the Atlanta Braves. Chipper Jones was inducted into the Baseball Hall of Fame in 2018, his first year of eligibility.

This is the 1992 Bowman Pedro Martinez rookie baseball card. It shows him in an action shot pitching for the Los Angeles Dodgers. The back of the card shows a photo of his head wearing an “LA” hat and it shows his 1991 and career stats in the minor leagues.

Pedro Martinez pitched two years for the Dodgers and four years with the Expos before getting to Boston where he was dominant and became one of the best pitchers in the history of the MLB. He lead the league in ERA 5 times, was a Cy Young three times (runner up two other times), and finished his career with the 4th best winning percentage for a pitcher. Pedro Martinez was inducted into the Baseball Hall of Fame in 2015, his first year of eligibility.

Trevor Hoffman was a dominant relief pitcher for 5 teams, but most known as a San Diego Padre. He was the first relief pitcher to ever get 500 saves, and then 600 saves. Trevor was also the all-time MLB saves leader until 2011 when that record was broken by New York Yankees great Mariano Rivera. Trevor Hoffman ended his career with 601 saves and a 2.87 career ERA and was inducted into the Baseball Hall of Fame in 2018, his third year of eligibility.

The 1992 Bowman Mike Piazza rookie baseball card shows an action shot of Mike crouching down while wearing his catchers gear with his Los Angeles Dodgers uniform. The back of the card shows a headshot with Mike Piazza holding a bat. The back of the card states: “Mike made his Professional Baseball debut at Salem in 1989. He played at Bakersfield in 1991. The back also shows his career and prior year minor league statistics.

Mike Piazza is known as one of the best offensive catchers in baseball history. He was elected to 12 all-star games, was runner up for Most Valuable player twice, and a 10-time silver slugger award winner at catcher (best hitting catcher). Mike Piazza ended his career with a .308 batting average, 427 Home Runs, and 1335 RBI’s. He was elected into the Major League Baseball Hall of Fame in 2016.

This is the 1992 Mariano Rivera rookie baseball card showing his wearing a nice shirt and pants posing with a smile. The back of the card shows a headshot of Mariano with a serious look. The back also shows his minor league totals for the previous year and his career.

Mariano Rivera is the most dominant relief pitcher to ever play in the MLB. He saved 30 or more games for 15 years straight. He is a 13 time all-star and won 5 awards as the best relief pitcher in baseball. Mariano is also a five time World Series Champion with the New York Yankees. In his 19 seasons Mariano Rivera saved a major league record 652 saves, has a career ERA of 2.21 and was inducted into the Baseball Hall of Fame in 2019.

Bowman decided to position themselves as a hobby “premium” in 1992 with success. With some nice star cards of Frank Thomas, Ivan Rodriguez, Chipper Jones and rookies like Trevor Hoffman, Mariano Rivers, Manny Ramirez, Carlos Delgado, and Mike Piazza this set is one of the more popular and collectable sets of the 1990’s.