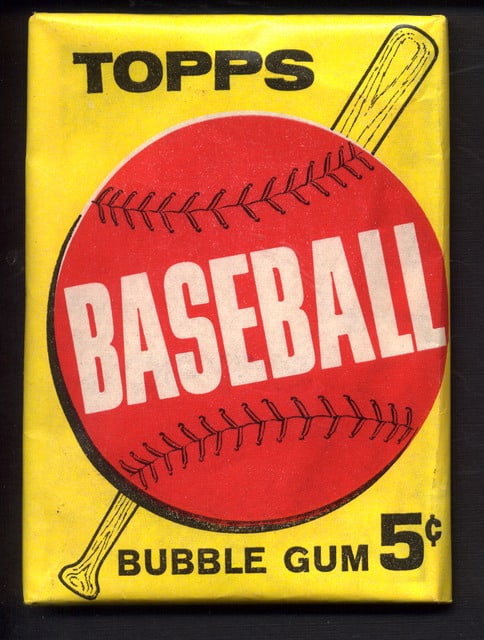 The 1963 Topps baseball cards set contains 576 cards and each card measures 2 1/2″ x 3 1/2″. The cards feature a nice color picture of each player bordered on three sides with white. The bottom of the card contains a bold color undeath the picture that then shows the players name, team, and position. The bottom left side contains a black and white action shot of the player with a one color background.

What Are The Best 1963 Topps Baseball Cards?

There are many hall of famers and a few rookie cards in the 1963 Topps Baseball Cards set. And there is also one rookie card of a player that should be in the hall of fame but is not. Look below and see for yourself what are the best 1963 Topps baseball cards.

This is the 1963 Topps Bob Gibson card that shows a large headshot of Bob wearing his St. Louis Cardinals had and uniform. The small circle action shot shows him in a pitchers pose. The back of the card says “Bob compiled the lowest E.R.A. of the Cardinal staff and was 5th in the N.L. standings last season. The cartoon on the back says “Bob led the N.L. in bases on balls in ’61.

Bob Gibson played for 17 seasons in the Major Leagues. He won one Most Valuable Player award, two Cy Young awards, he was a 9 time all-star, and won two World Series with the St. Louis Cardinals. Bob Gibson ended his career with 251 wins, 3117 strikeouts, and a 2.91 ERA. He was inducted into the Baseball Hall of Fame in 1981, his first year of eligibility.

The 1963 Topps Lou Brock shows a large picture of him smirking and wearing his Chicago Cubs uniform. The small circle at the bottom shows Lou holding a bat in his batting stance with a red background. The back of the card says “Lou led the Northern League in batting in 1961, his first season in professional ball. With St. Cloud, the youngster led his circuit in doubled and runs scored. A speedster, Lou knows how to rattle a pitcher when he is on base”. The cartoon on the back shows a cub bear stealing a base and says “Lou stole sixteen bases last season”.

Lou Brock played 19 seasons in the Major Leagues, starting with Chicago, and then playing the rest of his career with the St. Louis Cardinals and won 2 World Series with them. He was a seven time all-star and runner up to Most Valuable Player in 1974. Lou ended his career with 938 stolen bases, which was the MLB record at that time but has since been broken by Rickey Henderson. Lou Brock was inducted into the Baseball Hall of Fame in 1985, his first year of eligibility.

This is the 1963 Topps Sandy Koufax baseball card. It shows Sandy in a pose like he is ready to pitch the ball. The small circle picture shows Sandy Koufax starting his stretch. The back of his card says: “Sandy was on his way to having a sensational season in 1962, when an ailment on his pitching hand hampered him. The fireballer lead the N.L. in ERA.”. The cartoon on the back shows a player being help up by his team and it says “Sandy pitched a no-hitter vs. the Mets last year.”.

Sandy Koufax pitched 12 seasons all with the Brooklyn and Los Angeles Dodgers. He won 3 World Series and twice was named the Most Valuable Player of the World Series. Sandy was an all-star for 6 seasons, won three Cy Young awards, and one Most Valuable Player award. He finished his career with 165 wins, 2396 strikeouts, and a career 2.76 ERA. Sandy Koufax was the youngest player inducted into the Baseball Hall of Fame at age 36.

The 1963 Hank Aaron baseball card shows a picture of the outfielder wearing his Milwaukee Braves uniform and cap. The small circle black and white image shows Hank holding a bat in his batting stance. The back of the card says “The All-Star has won two N.L. batting titles. He has a .364 World Series average.”. The cartoon shows a batter and pitcher and says “Hank slammed 3 homers in the ’57 world series.”.

Hank Aaron is one of the top 5 players to ever play the game. He is one of two players to his 30 or more home runs in at least 15 seasons. This baseball card is one of his many great Hank Aaron baseball cards. Probably the most consistent player throughout his career ever. His 755 career home runs is a major league record. He broke Babe Ruth’s home record that stood for 33 years. Hank Aaron was inducted into the Baseball Hall of Fame in 1982, his first year of eligibility.

This is the 1963 Topps Tony Oliva rookie baseball card. The card shows four 1963 rookie stars that include Max Alvis, Bob Bailey, Ed Kranepool, and the hall of famer Tony Oliva. The back of the card shows the minor league lifetime records for all players. Tonly Oliva has a minor league career batting average of .370, 27 HR’s, and 174 RBI’s.

Tony Oliva played 15 seasons in the MLB, was rookie of the year in 1964, and made the all-star team his first 8 seasons in the major leagues. During that time he led the league in hits 5 times, runs once, and batting average 3 times. Tony was then hampered with knee issues that forced him to become a DH the last four years of his career. He finished his career with 1917 hits, 220 home runs, and a lifetime batting average of .304. Tony Oliva was inducted into the Major League baseball Hall of Fame in 2022 by the Veterans Committee.

This is the 1963 Topps Willie Mays baseball card. It has a large full color photo of Willie holding a bat and then at the bottom right of the card there is a black and white photo of him holding a bat in a circle with a red background. The back of the card shows the complete major and minor league batting record. There is a cartoon at the upper right that shows a batter smacking the ball past the pitcher and below it says “Willie has an all-star game batting average of .425.”.

Willie Mays is one of the top 5 players to ever play. Some wonder if he would not have taken off for Military duty, would he have broken Babe Ruth’s home run record before Hank Aaron? Even after being out for two years, “The Say Hey Kid” played 22 seasons and finished his career with 660 home runs, 1909 RBI’s, and a career .301 batting average. Willie Mays was inducted into the Baseball Hall of Fame in 1979, his first year of eligibility.

The 1963 Topps Roberto Clemente shows a large full color photo of him wearing his Pittsburg Pirates uniform. The small circle black and white image at the bottom shows him holding a bat with a red background. The back of the card says “Bob had his best year in 1961 when he was the National League batting champ. the outfield hit 3 triples in a game in ’58 to tie a mark.”. There is a cartoon at the top right that shows a funny looking guy about to swing the bat and below it say “Bob batted .310 in the 1960 World Series.”.

Roberto Clemente played 18 seasons in the Major Leagues and was selected to 15 all-star games during that time. Not only could he hit, he could also play the field at a high level. Roberto won a gold glove for the outfield in 12 consecutive seasons. He ended his career with a .317 batting average, hit 240 home runs, had 3000 hits, and was the Most Valuable Player once. Roberto Clemente was inducted into the Baseball Hall of Fame in 1973, and he did not have to wait the full 5 years to be eligible because of his death by a plane crash earlier that year.

Willie Stargell played 21 seasons and all of them with the Pittsburg Pirates. He has the most home runs in the 1970’s with 296. In 1979 became the only player in Major League history to win the NL Most Valuable Player, the NL Championship Series MVP, and the World Series MVP in one season. Willie Stargell finished his career with a .282 batting average, 475 home runs, and 1540 RBI’s. He was inducted into the Baseball Hall of Fame in 1988, his first year of eligibility.

The 1963 Mickey Mantle card shows a large full color photo of him wearing his New York Yankees pinstripes. The bottom circle black and white image shows him in his batting stance with a light blue background. The back of the card says “Mickey ranks seventh among the all-time home run hitters. He has won 3 A.L. MVP awards.”. The cartoon at the top shows a hitter in yellow being celebrated by other teammates in white and it says “Mickey has hit 14 World Series homers”.

Mickey Mantle is considered by most to be one of the top hitters ever in baseball. There are very few players cards that demand the prices that Mantles get. Mickey Mantle won the MVP 3 times, won 7 World Series, and was inducted into the Baseball Hall of Fame in 1974.

This is the 1963 Topps Pete Rose rookie baseball card. The card contains the following 1963 Rookie Stars: Pedro Gonzalez, Ken McMullen, Al Weis, and Pete Rose. The card has head shots of all of them in a red circle background. The back of the card shows minor league statistics for all four players. Pete Rose’s shows that he had a .317 batting average, 15 home runs, and 159 RBI’s in 1870 at bats.

Pete Rose is by far the best player not in the Major League Baseball Hall of Fame. “Charlie Hustle” played in the MLB for 23 years. He was a switch hitter and holds all time MLB records for hits with 4256, a record that will probably never be broken. Pete Rose won 3 World Series, won 3 batting titles, two gold gloves, the rookie of the year, and one MVP award.

The 1963 Topps Baseball Cards set contains some amazing hall of fame players along with four great rookie cards in Pete Rose, Willie Stargell, Rusty Staub, and Tony Oliva. The Pete Rose is considered a high number and rare, which adds to the value of his great rookie card. Some other high cards include Stargell, Clemente, Duke Snider and Nellie Fox. Unfortunately is is difficult to find cards in good condition because the solid color extends to the tips are prone to wear.