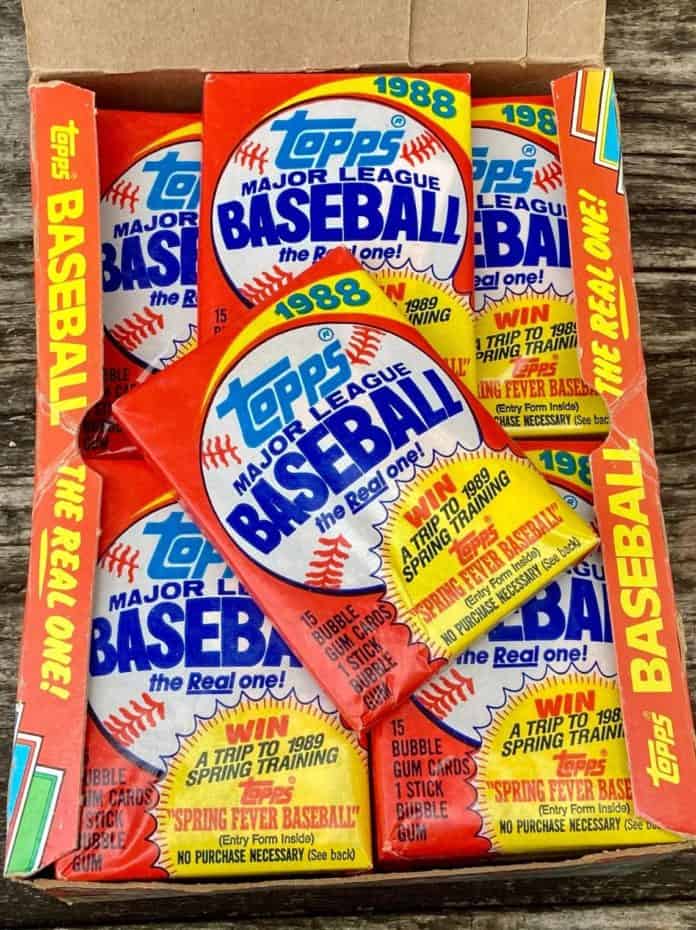 The 1988 Topps Baseball Cards set consists of 792 cards with each one measuring 2 1/2″ x 3 1/2″. The front of the card shows the player in a still photo or action shot during a baseball game. At the top in bold color is the team name, and then at the bottom right on an angle is the players name in a color block. Then there is the Topps logo on the bottom left.

The back of the card is mainly orange with some white, and then black fonts. The top back shows the players name, position, and then basic player information like height, weight bats, throws, drafted by and date, how acquired, born date, born city and state, and current home. Then there is the complete major and minor league batting record, and then way at the bottom is some cool information about the player.

What Are The Best 1988 Topps Baseball Cards?

In the heart of the junk wax era we have the 1988 Topps Baseball Cards. There are some nice hall of famers and a very few rookies that are worth mentioning. But it is still a nice set by Topps even though mass produced. See below the best 1988 Topps Baseball cards.

This is the 1988 Topps Roger Clemens baseball card. It shows Roger in action pitching during a game wearing his Boston Red Sox uniform and hat. The back of the card says “At New Britain in 1983 Roger held opponents to a .167 Average. In the Eastern League Playoffs he won his 2 Starts vs. Reading and Lynn.” It also says below that: “Roger singed as a 1st round Draft selection with the Red Sox, June 21, 1983 by Scout Danny Doyle.”

This is the 1988 Topps Pirates Leaders featuring Barry Bond and Bobby Bonilla, both holding a bat while wearing their Pittsburg Pirates practice jerseys. The front of the card also has “Pirates Leaders” below the photo. The back of the card shows all the team leaders for the 1987 season. Bobby Bonilla lead the team in batting average with a .300. Barry Bonds lead the team in Runs with 99 and Home Runs with 25.

The 1988 Topps Greg Maddux baseball card has an in action photo of Greg at the beginning of his windup ready to pitch. The back of the card says “Recorded 1st major league Shutout: 7-1-87”. And below that it says “Greg signed as a 2nd round Draft selection with the Chicago Cubs, June 19, 1984 by Scout Doug Mapson.”.

In 1987 Greg Maddux was in his early years of his career and struggled with a 5.61 ERA with a 6 – 14 record. But he did have one complete game and one shutout.

This is the 1988 Topps Mark McGwire baseball card showing the young player holding a bat while wearing his Oakland A’s uniform. At the bottom right it shows that Mark McGwire was a Topps All-Star Rookie with a picture of a trophy. The back of the card says “Mark tied for California League lead with 24 Home Runs and 106 Runs Batted In at Modesto in 1985. The back also says “Mark signed as a 1st round Draft selection with the Athletics, July 27, 1984 by Scout Dick Wiencek.

In 1987 Mark McGwire lead the league in home runs with 49 and Slugging Percentage with .618. He won the Rookie of The Year and finished sixth in MVP voting.

The front of this card shows both Mark McGwire and Jose Canseco holding a bat and wearing their Oakland A’s uniforms. At the bottom is also says Athletics Leaders. The back of the card shows the 1987 team leaders for Oakland. Mark McGwire lead the team with 97 Runs, 49 Home Runs, 118 RBI’s and .289 batting average. Jose Canseco lead Oakland with 162 hits, and 35 doubles.

The 1988 Topps Ken Caminiti shows him at the end of his swing in an action shot during a game wearing his Houston Astros uniform. The back of the card says “Ken was a 1981 graduate of Leigh (San Jose) High School. He also attended San Jose State University.”. It also says “Ken signed as a 3rd round Draft selection with the Astros, Jun 9, 1984 by Bill Hallauer and Paul Weaver.

This is the 1988 Topps Nolan Ryan baseball card. It shows him pitching during a game while wearing his Houston Astros uniform. The back of the card does not have any notes about Nolan Ryan because they need all the space to show his yearly stats since 1966.

In 1987 while pitching for the Houston Astros, Nolan Ryan went 8 – 16, but finished the season leading the league in ERA with 2.76 and Strikeouts with 270. Another one of those great seasons for Nolan Ryan but because he played on a sub par team, he didn’t get the wins you would expect from those other stats.

This is the 1988 Topps Barry Bonds baseball card. It shows him with a smile standing around home plate probably during warmups. He is waring his Pittsburg Pirates uniform. The back of his card says “Barry went 4-for-5 with 3 Home Runs for Prince William (Carolina League) as Durham, July 19, 1885.”. Under that there is a “This Way To The Clubhouse…” that says “Barry signed as a 1st round Draft selection with the Pitts. Pirates, June 5, 1985 by Scout Jerry Gardner.”.

In 1987 Barry Bonds was still finding his way and finished the season with a .261 batting average but hit 25 home runs, 59 RBI’s, and 32 stolen bases. Not bad for the start of a great career.

The 1988 Topps Tom Glavine Rookie card shows the young pitcher chest up smiling and wearing his Atlanta Braves uniform. The back of the card says “Tom was selected by the Los Angeles Kings in the 1984 National Hockey League Draft but opted for baseball.”. It also say below that “Tom signed as a 2nd round Draft selection with the Braves, June 22, 1984 by Scout Tony DeMacio”.

In 1987 Tom Glavine pitches 50 innings of not so stellar ball. He finished that season with a 5.54 ERA and 2 wins. Tom Glavine ended up his career with 305 wins and was elected to the Baseball Hall of Fame in 2014, his first year of eligibility.

The 1988 Topps Baseball cards set contains some hall of famers and future hall of famers such as: Roger Clemens, Dennis Eckersley, Rafael Palmeiro, Nolan Ryan, Greg Maddux, and Barry Bonds. The important rookies included in this set are: Ken Caminiti, Ellis Burks, Matt Williams, and Tom Glavine. As seen above, the best card is the Tom Glavine rookie card with a close second being the Nolan Ryan or Barry Bonds cards.