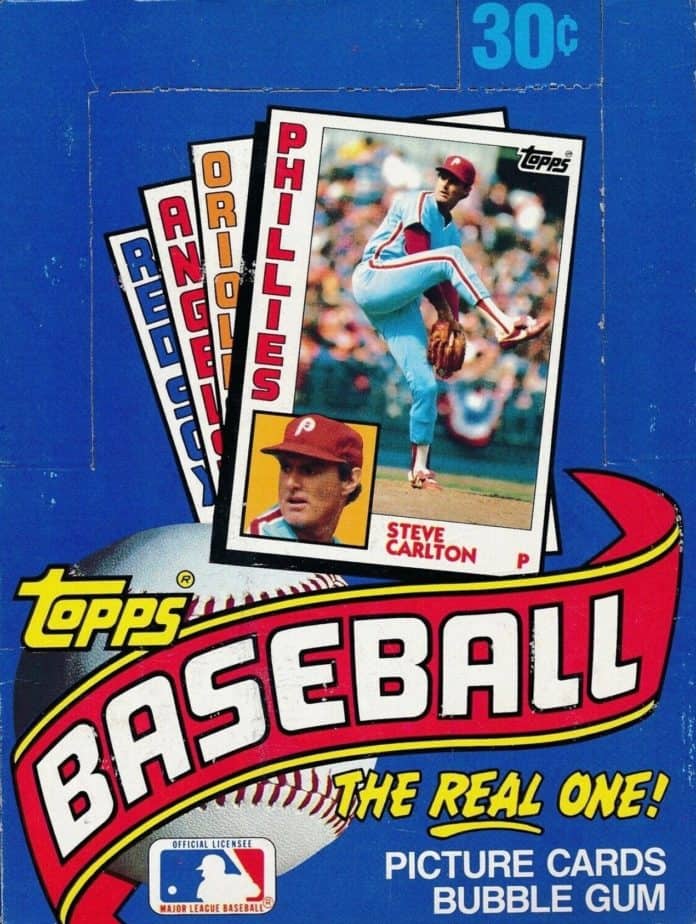 When baseball card collectors think 1984 Topps baseball cards, they think of the Don Mattingly rookie card. Mattingly might not be a hall of fame legend, but his card still remains an icon for the hobby.

The Topps Baseball 1984 set has been one of the most attractive baseball collections of the decade. For the second straight year Topps had a main action photo and then a small boxed portrait at the lower part of the card. The biggest difference as comparted to the 1983 predecessors is that the small portrait is a square and not a circle like in 1983.

Yes the Don Mattingly rookie card is one of the most iconic cards of the 80’s. The card features an action shot him playing first base and then a small head shot at the lower left side of the card. Then it shows the team name “Yankees” in all caps on the left side printed downward and the name and position at the bottom right of the card in a purple/pink color.

Most Nolan Ryan cards are usually one of the best in the sets, and this year is no different. The 1984 Topps baseball shows Nolan Ryan in a large action shot of him pitching with the Houston Astros and ready to unleash a fastball, and at the bottom right is a headshot of Nolan kind of smirking.

Arguably one of the best shortstops to play in the mlb. Cal Ripken Jr. made a name for himself in 1981 when he won the Most Valuable Player award in Major League baseball. The 1984 Topps Cal Ripken shows a large in actions shot of Cal taking batting practice wearing a Baltimore Orioles uniform along with a small headshot with a fierce look.

In his later years now, the 1984 Pete Rose is still very collectable, just like all of his baseball cards. Even though he is not in the hall of fame, his career numbers still make him one of the best pure hitters in baseball history. The 1984 Topps Pete Rose shows him in a large in action shot probably hitting a ball and getting ready to run to first base. At the bottom left is a square head shot with a small grin.

This is one of the great rookie cards of Darryl Strawberry. His first year he belted 26 home runs and 74 RBI’s and won the MLB Rookie Of The Year honors. If it was not for life setbacks, Darryl would definitely be in the hall of fame. Darryl Strawberry’s 1984 Topps rookie card shows a large in action photo of him at the end of his swing, probably belting a home run. At the bottom left of the card is a small square headshot of Darryl smiling.

The 1984 Topps Tony Gwynn is his second year card. It features Tony taking practice swings before he gets in there to line a hit and get on base. The small box on the left contains a headshot of Tony Gwynn with a serious look. The year prior Gwynn had a steller year batting .372 in 304 at bats. Great start to a hall of fame career.

The 1984 Wade Boggs is the card for his second year. The card shows Wade Boggs action image most likely hitting a line drive and is about to head to first base for a single. The headshot at the bottom left shows serious Wade with a red face probably from sun burn. The year prior Wade Boggs his .349, had 210 hits, and still only came in third for rookie of the year after the great Cal Ripken and Kent Hrbek.

The 1984 Topps Rickey Henderson is just a beautiful card of Rickey. And as he would say “Rickey can run”. The card shows Rickey leading off and ready to get another one of this 108 stolen bases he got during the previous season. That was also his third time stealing over 100 bases for they year up until this point.

In the early 80’s George Brett was to some people the best player in baseball. So here we have a nice card of George Brett playing third base. There is a headshot at the bottom left with a serious look with maybe a tiny smirk. The prior year George had a very respectable season hitting .310 and knocking 25 home runs for the Kansas City Royals.

Yes I know how does Ryne Sandberg make this list. Well because there were not many good rookies in 1984, and since this is his second year card, it is very collectable in good condition. The 1984 Topps Ryne Sandberg shows the future hall of fame second baseman in his hitting stance waiting to hit the ball. Then there is the standard headshot that shows Ryne with somewhat of a fake smile. At this point in time Ryne has yet to be the star hitter that he became. But just wait…

Even though the 1984 Topps Baseball Cards are at the beginning of the junk wax era, this set is beautiful and highly collectable because of the Mattingly rookie and the other hall of famers included in the set.